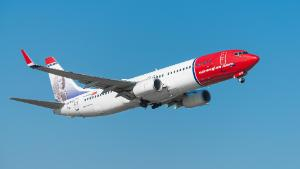 Norwegian Air, Europe’s third-largest low-cost carrier, is seeking a lifeline from bondholders as it grapples with a cash crunch.

It has asked for two more years to repay its largest outstanding bonds, worth $380 million, and is putting up its lucrative landing slots at London’s second busiest airport as collateral.

“They are managing the crisis as best they can but they are on the verge of a cliff edge,” Bernstein analyst Daniel Roeska told CNN Business.

Norwegian Air has grown rapidly. In 2012, as it prepared to take on the big players in the transatlantic market, it placed an order for 222 aircraft, the biggest in European aviation history. But this aggressive expansion left it with high levels of debt, which means it has little room to move if things go wrong.

And plenty has gone wrong. Norwegian Air had to halt flights between Ireland and North America starting on September 15 because of the grounding of all 18 of its Boeing 737 MAX aircraft.

The airline’s stock has plunged by 65% this year. And in July, CEO and founder Bjoern Kjos, the company’s largest shareholder, stepped down. It is still looking for a permanent replacement.

Payment delays from credit card companies reduced its working capital by some 4 billion Norwegian kroner ($439 million) in the second quarter of 2019, compared to the same period last year, Norwegian Air said on Monday.

That wiped out $353 million it raised by issuing new shares in March, as well as the proceeds from the recent sale of a stake in a Norwegian bank, which netted it 934 million Norwegian kroner ($102.6 million). It also earned $127 million from the sale of some aircraft this year.

Europe’s airline industry has suffered a number of failures over the past two years, including Monarch and Flybmi in Britain, and Air Berlin in Germany. Rising costs, until the very recent fall in fuel prices, are largely to blame, according to an April report by the International Air Transport Association.

If bondholders agreed to Norwegian Air’s debt restructuring it would “extend the lifeline a little bit,” he said.

Norwegian Air is trying to shore up its finances heading into the quieter winter period. Cash flow problems typically become unsustainable in the seasonally weak period of October to February, according to International Air Transport Association.

The company plans to push back one bond repayment from December 2019 to November 2021. A second bond that matures in August 2020 would be delayed to February 2022. Norwegian Air will meet with bondholders on September 16 to discuss the offer.

The debt rescheduling could put bondholders in a stronger position because Norwegian Air is offering to put up its take-off and landing slots at Gatwick Airport as collateral against what was previously an unsecured bond.

If the bondholders don’t accept the deal, Norwegian Air may be forced to revisit the idea of selling itself to a bigger player. The airline has previously rejected takeover offers from IAG (ICAGY), the owner of British Airways, and Lufthansa (DLAKY).

Negotiations about the establishment of a joint venture for a part of the aircraft fleet were progressing, Norwegian Air said

DISCLAIMER: The Views, Comments, Opinions, Contributions and Statements made by Readers and Contributors on this platform do not necessarily represent the views or policy of Multimedia Group Limited.
Tags:
Norwegian Air