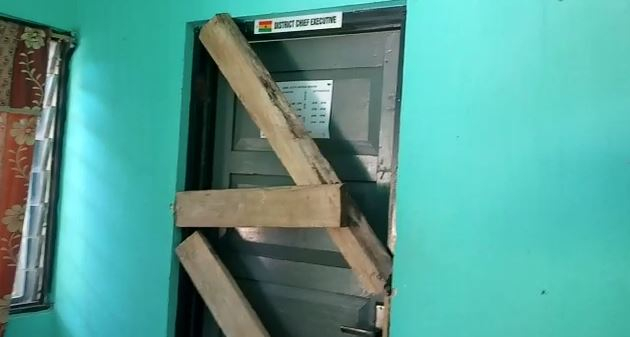 Irate youth in the Kete-Krachi Tuesday afternoon stormed the District Assembly, office and locked the premises.

The youth, claiming affinity to the governing NPP, are demanding the immediate dismissal of the District Chief Executive of Krachi West.

The protesting youth aver that Osei Nti Douglas has misconducted himself and his actions since assuming office, have been inimical to the NPP’s interests.

One of the leaders of the group told Joy News “all efforts for party members to reach out to him have proven futile.”

On a matter of courtesy and standard practice, the youth say Douglas has refused to go around the District to introduce himself to members of the community.

This, the youth say, is gross disrespect to community leaders.

“It is leading to the collapse the NPP in the community,” he said.

Douglas has also been cited for “sabotaging government policies.” Reading a petition, the youth say the DCE has prevented the effective implementation of LEAP, a pro-poor programme.

“It took the intervention of an Assembly Member to get people register,” they said.

The youth also say a Nissan Patrol belonging to the office of the DCE, has been seized by a mechanic in the community because the Assembly owes the said mechanic.

“We implore you to exercise your powers and remove him,” the youth said in conclusion of their statement.

How can the DCE be removed?

The powers to appoint the DCE until recently, lie with the “President with the prior approval of not less than two-thirds majority of members of the Assembly present and voting at the meeting.”

The protesting youth want President Akufo-Addo to use his powers under Article 243/3 (b) of the 1992 Constitution to remove him.

“The office of District Chief Executive shall become vacant if – he is removed from office by the President.”

Other than that, a vote of no confidence, supported by the votes of not less than two-thirds of all the members of the District Assembly must be passed against him.

The law has, however, been changed for DCEs to be elected.