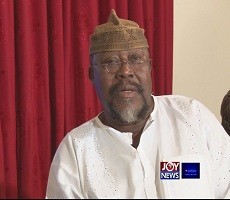 Dr Nyaho Nyaho-Tamakloe, a founder member of the New Patriotic Party (NPP), is questioning the composition of the party’s national vetting committee.

He spoke to the Daily Graphic soon after the media had picked information that the vetting committee of the NPP had disqualified five aspirants from contesting various positions in the party's upcoming congress. Mr Paul Afoko, who media reports suggest is making huge inroads in his campaign for the chairmanship slot, is expected to continue with his vetting next week.

The five are: Fred Amankwah Sarfo, Hajia Fatima and Philomena Serwah Akoto (who were all vying for the Vice-Chairmanship position); Kamal Abdulai (who was contesting the position of Nasara Coordinator) and a fifth person who has not been named. They have until Monday, February 17, 2014, to appeal against the decision of the vetting committee.

According to Dr Nyaho Tamakloe, the composition of the current members of the vetting committee was worrying.

The vetting committee is chaired by Mr C. K. Tedem, with Rev. Dr Asante Antwi, Dr Adjei Bawuah, Brig Gen Joseph Odei (retd) and Mr Kwabena Sarpong as members. Others are: Madam Cecelia Dapaah, Mrs Catherine Afeku, Mr Ayikoi Otoo and Mr Martin Adjei Mensah Korsah as Secretary to the committee. He highlighted the fact that  the composition of the committee members, is about over 85 per cent  Akan.

Interestingly, the leading member of the NPP points out that out of the five alleged to be disqualified, three were from the north.

“This reinforces the huge perception out in the public domain that the party is Akan-dominated,” Dr Nyaho Tamakloe stated.

He wondered how all the aspirants satisfied the requirement for vetting and yet the committee had disqualified some of them.

“You come out with a composition of members of a vetting committee such that when the results are out, it will be acceptable by all because it is deemed to be a fair and balanced committee,” Dr Nyaho Tamakloe pointed out.

He also asked; “The incumbent Chairman of the party, Mr Jake Otanka Obetsebi Lamptey, is still under investigation of having embezzled party funds and logistics for election 2012; what is the outcome of that investigation?”

In his view, the party had senior people who were well-versed in party matters and had the requisite expertise to handle the party at this crucial stage.

He mentioned names such as Odoi Sykes, Sammy Okudzeto, Roland Alhassan, Gladys Asmah,  Appiah Menkah, ex-President J.A.  Kufuor, Kwame Pianim, Donkor Fordjour and Cecelia Bannerman and asked “how can there be a national vetting committee without these experienced personalities?”

“What is happening now in our party? The way affairs are being handled leaves much to be desired. If care is not taken they will destroy the party before our very own eyes,’ he declared.

According to Dr Nyaho-Tamakloe, “in every political organisation, there are senior people,” but “for sometime now, many of the senior members of the party have been sidelined for their selfish interest and the few who want to participate in the affairs of the party are being attacked anytime they want to contribute”.

He argued that the party had the tradition of generational handover based on merit but “party leadership struggle was affecting the well-being of the party.”

“What is going on at the moment is very very disturbing and worrying and must be handled very very carefully,” Dr Nyaho Tamakloe concluded.

The party last Thursday concluded the vetting of 44 aspirants, including six incumbent executives seeking re-election for a total of eight positions but has suspended its planned  balloting for positions which was expected to take place yesterday.