Obama on Libya: 'Tripoli is slipping from the grasp of a tyrant' - MyJoyOnline.com

Obama on Libya: ‘Tripoli is slipping from the grasp of a tyrant’ 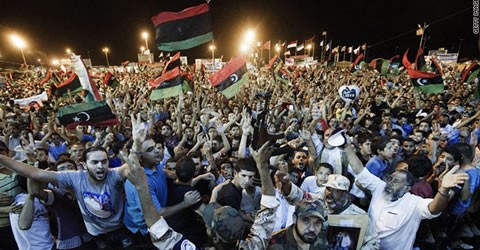 Martha’s Vineyard, Massachusetts (CNN) — With the regime of Col. Moammar Gadhafi appearing to be quickly falling apart, President Barack Obama released a statement late Sunday calling on the dictator to “relinquish power once and for all.”

“Tonight, the momentum against the Gadhafi regime has reached a tipping point. Tripoli is slipping from the grasp of a tyrant. The Gadhafi regime is showing signs of collapsing. The people of Libya are showing that the universal pursuit of dignity and freedom is far stronger than the iron fist of a dictator,” said Obama in the statement.

“The surest way for the bloodshed to end is simple: Moammar Gadhafi and his regime need to recognize that their rule has come to an end,” he continued. “A season of conflict must lead to one of peace.”

Regime appears on verge of collapse

The White House was anxiously monitoring the developments from Obama’s vacation residence on Martha’s Vineyard, where he has been getting frequent updates in between golf games and social outings.

His counterterrorism adviser John Brennan has been keeping the president on top of the developments, the White House said, with intelligence from a team on the ground in the rebel stronghold of Benghazi in eastern Libya.

Obama first called on the Libyan dictator to step aside in February, but despite tough new sanctions and pressure from NATO forces, Gadhafi has thumbed his nose at the West and its allies.

With unrest in the streets, rebel forces making significant gains and uncertainty about Gadhafi’s whereabouts, Republican Sens. Lindsey Graham and John McCain, who recently traveled to Libya to meet with rebels, were cautiously optimistic on the prospects of the regime’s collapse.

A timeline of the conflict in Libya

“The end of the Gadhafi regime in Libya is a victory for the Libyan people and for the broader cause of freedom in the Middle East and throughout the world. This achievement was made possible first and foremost by the struggle and sacrifice of countless Libyans, whose courage and perseverance we applaud,” McCain and Graham said in a statement.

“Americans can be proud of the role our country has played in helping to defeat Gadhafi, but we regret that this success was so long in coming due to the failure of the United States to employ the full weight of our airpower.”

Gadhafi spokesman Musa Ibrahim blamed Obama, NATO and the West for the conflict and appealed for a cease-fire.

“Every drop of Libyan blood shed by these rebels is the responsibility of the Western world, especially NATO’s countries,” he said. “We hold (U.S. President Barack) Obama, (British Prime Minister David) Cameron and (French President Nicolas) Sarkozy morally responsible for every single unnecessary death that takes place in this country.”

Obama has asked his national security team to keep him updated as necessary, and he’s expected to be briefed on Monday morning.