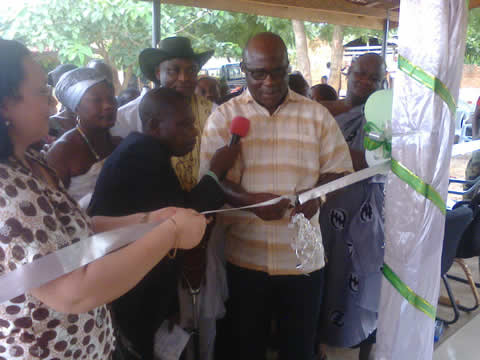 A community–based health planning services (CHPS) compound has been inaugurated at Yokwenya, a suburb of Odumase-Krobo in the lower Manya Krobo municipality.

The move is part of measures to make health care delivery available to the doorstep of the people.

The project, an initiative of the Member of Parliament for the area will go a long way to reduce the difficulty in accessing healthcare in the area.

The project, according to the MP, is to compliment government’s programme of establishing CHPS compounds in every community in the country which has already begun.

Odumase-Krobo, capital of the lower Manya-Krobo constituency, currently has no health facility.

People in the area resort to the Atua Government Hospital and the St.Martins De Porres Hospitals at Akuse, which are several kilometers from Odumase.

At the official opening the facility, Member of Parliament, Ebenezer Okletey Terlabi, explained the inaugration of the CHPS compound will bring great relief to residents, especially pregnant women in and around Odumase-Krobo who for several decades been travelling several kilometres to access healthcare.

“You know there are people who are living beyond this area, coming down and then getting to the main streets to board vehicle to the government hospital is quiet a distant. And sometimes the availability of vehicle is also a headache but then when we get them close here they can just walk [to access healthcare]”, he noted.

According to the MP, who also doubles as a deputy Lands and Natural Resources Minister, residents will develop confidence in healthcare officials stationed there whom they can easily share any health issue confronting them.

In a move to ensure the facility operates for 24 hours, Mr. Okletey Terlabi explained that he will do whatever it takes to ensure that the nurses get residence in any of the houses close to the CHPS compound.

“I will do that so that they become part of the community, identify their problems and advise them accordingly”, he added.

According to her the health directorate recorded 13 maternal mortalities in the year 2013 as against three in the first quarter of this year.

“Although we have recorded three maternal deaths in the first half of this year, our goal is to record a zero death”, she said.

She said pregnant women who are able to attend the government hospitals still developed complications because they arrived late.