One dead, several injured after explosion at abandoned quarry 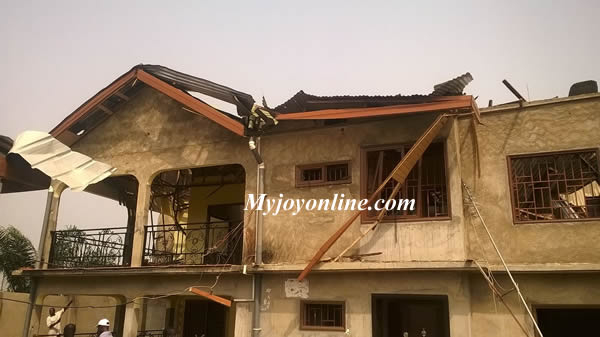 A 38-year-old welder is reported dead following an explosion at an abandoned quarry site at Peabo in the Nsawam Adoagyiri Municipality of the Eastern Region on Wednesday.

Ibrahim Mohammed, was in his house when the first explosion occurred. Out of curiosity, he decided to take a look for himself but met his untimely death when a second erupted.

One of the houses had its roof ripped off during the explosion.

About 13 other people who sustained various degrees of injuries in the explosion are being treated at the Nsawam Government Hospital.

Joy News correspondent Kofi Siaw is in the area and reports that residents are devastated.

Some residents had the roofs of their houses ripped off, while many others had their properties destroyed as a result of the explosion.

Residents trying to salvage the remianing of their belongings

The Eastern Regional Director of the Environmental Protection Agency (EPA) Felix Addo-Okyereh blamed the incident on explosives stored at the Akuabo Quarry which had been closed for the past four years.

The Eastern Regional Director of the Environmental Protection Agency (EPA) Felix Addo-Okyereh, blamed the incident on explosives stored at the Akuabo Quarry.

The quarry was closed down four years ago.

According to him, the private company did not have the licence to keep explosives at the abandoned site

He said the EPA is investigating the situation and advised that the residents be evacuated from the area to prevent any further casualties in case another explosion occurs.

The IGP and his entourage

Acting Inspector General of Police, John Kudalor who has been in the area to sympathize with the residents warned them not to go close to the quarry site.

He has ordered his men to cordon off the area and prevent residents from getting close.

“That place, for now, is a no go area, we have the place cordoned off and the police will ensure that there is maximum security there,” he said.

The IGP also said a thorough investigation will be conducted into the development and anyone found culpable would be duly punished.

“We assure the general public that we are going to do everything to get to the bottom of this matter to ensure that the right things are being done,” he promised.

He, however, called on the residents to assist the police with any information they have with regards to the operation of the quarry.

Eastern Regional Minister, Antwi Boasiako Sekyere who accompanied the IGP and the Deputy Interior Minister, James Agalga, said a committee will be set up to investigate the explosion.