Origi and Milner give Liverpool victory

Divock Origi and James Milner pitched in with second-half goals as Liverpool finally broke down stubborn Sunderland in a 2-0 victory on Saturday.

Jurgen Klopp's side will happily take the three points from this Premier League clash as their patience was pushed to the limits in a war of attrition at Anfield.

Sunderland seemed destined to leave with a point as they stood strong against continual Liverpool attacks until Origi, on for the injured Philippe Coutinho, broke the deadlock after 75 minutes.

Milner then confirmed the result with a 91st-minute penalty to put some gloss on a scoreline and send Liverpool back to the top of the Premier League, at least until Chelsea's encounter with Tottenham later on Saturday.

Sunderland arrived on Merseyside buoyed by consecutive victories that had moved them off the foot of the table.

David Moyes never won at Anfield as Everton or Manchester United manager in 13 visits and few held out hopes of him improving on that record against a Liverpool side playing the most attractive football in the Premier League at present.

A quiet opening saw Sunderland's disciplined defence keep Liverpool at bay and it was 15 minutes before the first chance but Georginio Wijnaldum's shot was comfortably saved by Jordan Pickford. 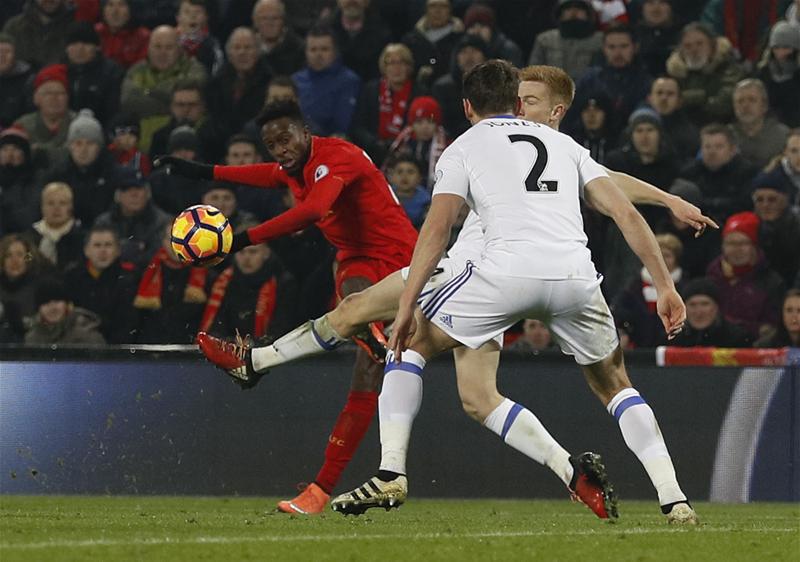 At the other end, Steven Pienaar could have given Sunderland the lead soon after but Loris Karius did well to block his close-range shot as the Black Cats looked to catch Liverpool on the break.

Chances remained a rarity as Liverpool failed to click and Sunderland remained happy with preserving their clean sheet.

In fact, the most noteworthy moment came halfway through the first half when linesman Steven Child had to be replaced by fourth official Neil Swarbrick due to a hamstring problem.

A more distressing concern for Liverpool was the ankle injury suffered by Brazil playmaker Coutinho shortly after, following a heavy challenge in the Sunderland area.

Coutinho was visibly in pain as he was stretchered off with his right ankle in a temporary brace, an incident that cast a further pall of gloom over an increasingly frustrated Anfield.

Just before half-time, Dejan Lovren missed a good chance as he was unmarked at the back post, but he headed Jordan Henderson's lofted free-kick wide.

Emre Can then did the same before the first-half ended with a long-range Lovren blast just missing the target.

Liverpool's inability to punish Sunderland was perfectly highlighted shortly after the break when Sadio Mane miskicked when 12 yards out.

The visitors offered a defensive wall of white shirts as John O'Shea marshalled the back four well in a bid to repel the home side.

By this point, the Reds were in total ascendancy and queued up to test Pickford in goal, but to little avail.

In fact, Klopp was so frustrated by his side's inability to score that he ran down the touchline after 60 minutes, desperately imploring the Anfield crowd to sing louder in order to lift his team. 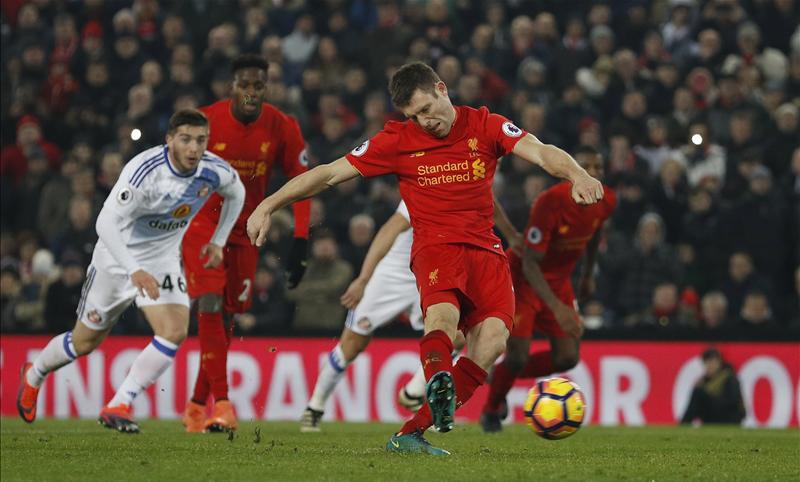 It nearly worked immediately, as a Can effort inched wide of the post, before Sunderland then hared up the other end thanks to Patrick van Aanholt, an attack which ended in Duncan Watmore's effort being well smothered by Karius.

The match became scrappy as Liverpool looked for an opening and Origi finally provided it, as his low-key, speculative effort from the edge of the box somehow beat everybody, including Pickford.

Sunderland were then caught on the counter-attack by Mane, who was hacked down by Didier Ndong, and Milner did the rest from the spot, a goal that finally allowed Liverpool to breathe easily.