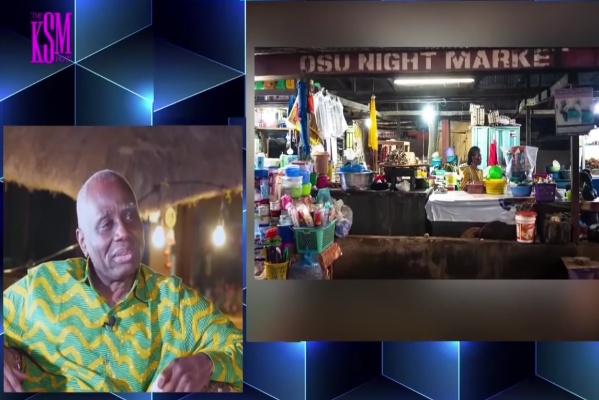 Veteran legal practitioner Tsatsu Tsikata has disclosed that the Osu Night Market is his number one eat-out place in a recent interview with KSM.

He lauded the Osu Night Market for being a refreshing spot for meeting his culinary expectations, especially during his days as a bachelor.

The former boss of the Ghana National Petroleum Corporation (GNPC) said a kenkey joint at the Market has been his favourite and still is.

In an interview on Pan African TV’s KSM Show, he narrated that, in order to impress some people close to him, he took them along to go and eat at his favourite kenkey and fish joint at the Osu Night Market.

“What is more amazing about it is that, apart from the wonders of her [seller] food, I got to find out that this lady, through her night market job, had educated her daughter,” he said.

He stated that, on one of his visits there, the seller introduced her daughter to him and said she is studying at the University of Ghana.

“Maybe by now, she may be a lawyer and she may as well be the next Supreme Court Justice,” he jokingly said.

He, however, added that he has lost track of his last visit “because these days, it’s not just because of coronavirus but being no longer a bachelor boy, he now has home-cooked food.”

He also stated that he used to go to Achimota’s Night Market as well, where the kenkey is also very good.

Mr Tsikata said although the staple Ghanaian food is his favourite, he also likes Akple or Fetri Detsi

He said if he doesn’t get his Akple or Fetri Detsi then kenkey is a good enough substitute.

DISCLAIMER: The Views, Comments, Opinions, Contributions and Statements made by Readers and Contributors on this platform do not necessarily represent the views or policy of Multimedia Group Limited.
Tags:
Ghana National Petroleum Corporation
KSM
Osu Night Market
Tsatsu Tsikata