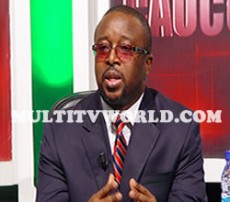 Kwadwo Twum Boafo, head of the Free Zones Board is accusing the head pastor of the International Central Gospel Church (ICGC) of crumbling under pressure from the opposition New Patriotic Party.

Dr Mensa Otabil, protested against the use of his messages for political campaigns by groups he said were affiliated to the NDC.

According to him, his messages were pieced, spliced and doctored to achieve partisan political gains.

At a press conference, he described the action as “defamatory, this unethical, this is criminal, this is malicious, it is Machiavellian and it is evil. It is a violation of grave impunity for any individual to seize a person’s thoughts without their consent and use it in a way that seeks to expose them to public hostility and disrespect.”

But speaking on Alhaji and Alhaji on Radio Gold Saturday, Mr Kwadwo Boafo said the pastor was not being consistent.

He said Otabil spoke to a top NDC politician about free education at the time the party was in opposition.

Twum Boafo said Pastor Mensa Otabil has failed a very important test “and that test is standing his ground on what he said.”

He alleged further that pressure was “put on him by elements of the New Patriotic Party to come and disavow his own words.”

Contributing to the same topic, Dr Tony Aidoo, the Director of Policy Monitoring and Evaluation at the Presidency disclosed that communicators of the National Democratic Congress (NDC), have been asked to take their foot off the pedal with regard to Dr Mensa Otabil’s anti free education tape.

He said the man at the centre of the controversy is directly or indirectly threatening to let his over 2000 congregation vote against the NDC.

According to him, “NDC communicators and persons who have over the years spoken in support of the NDC’s policies and programmes and continue to do so are presented with a very difficult dilemma over this issue.”

“There is a directive or an advice to the communicators,” which he said is one of the party’s dilemmas, “to take our foot off the pedal so far as a critical and judgment of the issue surrounding Pastor Mensa Otabil is concerned.”

Tony Aidoo explained that, “I believe the directive is made in terms of the logical appreciation of the fact that in politics every vote counts and that there has been a direct or indirect threat from the person involved in this controversy that he has a congregation of more than 2000 who will then be mobilized to vote against the NDC.”

A second dilemma, he added, is that, the communicators have a duty to expose the truth, contractions, and “a duty to the nation to let the people know that in as much as there is an issue that will eventually affect their lives there is a need to bring out the salient facts and the features of the issue.”

He stressed that there are millions out there who do not belong to Otabil’s church and they must decide that “we cannot sit down and allow 2000 people to threaten our destiny.”