Our government is thinking outside the box to transform Ghana – Bawumia - MyJoyOnline.com

Our government is thinking outside the box to transform Ghana – Bawumia 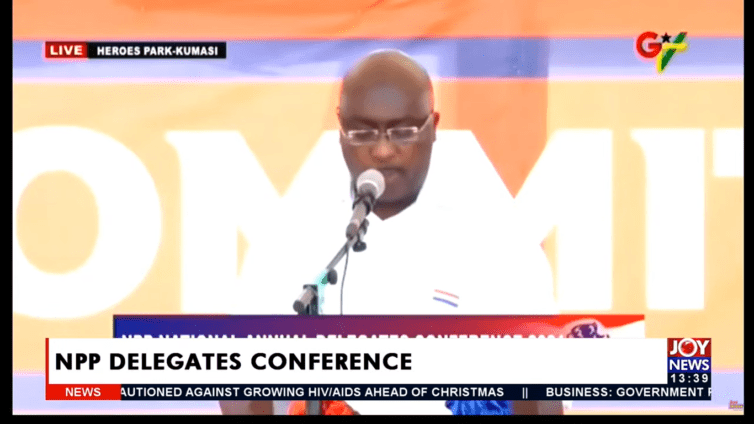 Dr Bawumia at the 2021 Delegate Conference stressed that the mantra ‘Breaking the Eight’ can only be achieved if the leadership and supporters of the party work in harmony and resist the misleading information the opposition National Democratic Congress (NDC) try to spread about the government.

Addressing party members at the National Delegates Conference on Sunday, he said government is transforming and driving economic development through the introduction of mobile money interoperability, digital property address system and the paperless clearing of goods at the ports amongst others.

Dr Bawumia argued that the New Patriotic Party (NPP) has managed the economy better than the previous government.

“The changes we are making as a party in government are historic and we are building on the distinguished legacy of President J.A. Kufuor. Ours is a government that is thinking outside the box to transform Ghana,” he stated.

Dr Bawumia indicated that with the current 12.2% inflation rate, 21% lending rate and the Gross International Reserves at $10.8 billion his party’s government is managing the economy better than the previous government.

The year 2020 recorded one of the lowest rates of depreciation in the last 28 years. The cumulative exchange rate depreciation of 2.6% in November 2021 the year is lower than the 9.7% depreciation recorded in 2016. For the first time in over two decades, the trade balance (the difference between what we export and what we import) recorded a surplus for four consecutive years from 2017-2020.

Gross International Reserves are at $10.8 billion (4.9 months of import cover compared to $6.9 billion (3.5 months of import cover) in 2016. Our record of creating jobs (over 750,000 jobs) is vastly superior to the record of the NDC government which froze public service recruitment. So if our performance on the key macroeconomic indicators (inflation, interest rates, depreciation, external reserves, trade balance and jobs) during the worst global pandemic in 100 years is better than your performance without such a pandemic how can you say your economic management is better?” Dr Bawumia said.

According to the Vice-President, the NPP since the fourth republic has been the most important driver of the Ghanaian vision and development agenda.

He noted that his party has a solid record of achievement in the Fourth Republic.

“Our party has become the most important driver of the Ghanaian vision and development agenda. We have been responsible for the most important policies which touch every Ghanaian in every corner of our nation, the NHIS, the school feeding program, the free antenatal services, the Free SHS, the free TVET program etc,” the Vice-President indicated.