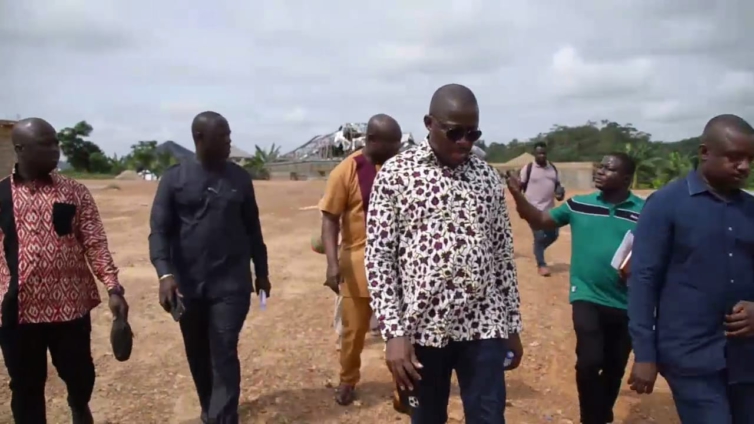 The Parliamentary Select Committee on Mines and Energy has charged the government to expedite the reconstruction of the Appiatse Community.

With the onset of the rains, the Committee fears the residents might be at the mercy of the harsh weather should they continue to live at the camp.

The Parliamentary Committee on Mines and Energy made the call less than 2 hours before the Friday rainstorm which displaced about 50 residents at the Appiatse relief camp.

They were visiting for the first time to commiserate with the victims.

The visit was also to offer the members of the Committee the opportunity to learn at first-hand efforts made so far in terms of the extension of reliefs to the residents.

While applauding the government for the efforts so far, the Committee requested for the timelines for the reconstruction which starts on Sunday, May 1.

Ranking Member of the Committee, Abdullah Jinapor noted that because it rains daily in the area, it is instructive that the government considers speeding up work on rebuilding the Appiatse community to avert another disaster.

“We have also been informed that a temporary structure is being put in place so they can move the affected people from the tents, it’s our hope that government will expedite action.”

Vice-Chairman of the Committee, Morris Elvis Donkor, charged the reconstruction committee to be transparent in the utilisation of the funds and items received so far.

“For transparency sake as a committee after here, we have it on our program that we want to have firsthand information on whatever is happening here. As a committee we are going to interrogate more, by engaging the Minister more and the Minerals Commission.“

Municipal Chief Executive for Prestea Huni Valley, Dr. Isaac Dsamani, briefed the Committee on work done so far and efforts to relocate some of the victims into permanent structures provided for by Future Global Resources, a mining company.