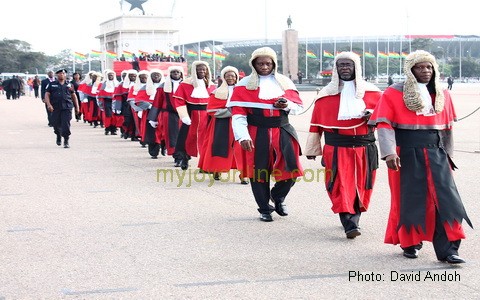 The Association of Magistrates and Judges of Ghana (AMJG) on Wednesday asked the government to pay their fuel, book and research allowances within reasonable time to avoid legal suit.

Sir Justice Dennis Adjei, President of AMJG, who described the legal action as the last resort to address their grievances, said the association had been pushed to the wall and the time had come for them to use judicial means to recover their allowances.

Sir Justice Adjei was speaking at the association’s 35th Annual General Meeting in Accra on the theme: "Judging with Integrity: the role of the Judge in Adjudication."

“We have not received salary increase for the past two years but fuel prices have been increased within the period under review at over 200 per cent,” he said, and described the situation as ‘ realistic.’

“The tradition has been that judges did not express opinion on their legitimate demands but it is time for them to make lawful demands,” he declared.

The President of AMJG also decried the unfair treatment meted out to retired judges by the Controller and Accountant General's Department (CAGD).

He said in some instances, it took the CAGD years to pay their gratuities, adding that, the Department is also limiting itself to monies payable to retired judges in terms of the Ewura Ama Committee Report and urged the Controller to stop misconstruing that.

On other matters, Sir Justice Adjei complained about what he described as ‘injustice and embarrassment’ being meted out to the legal fraternity by the national book publishers, notably the Ghana Publishing and the Assembly Press.

He said some laws of the country had been revised and consolidated but the two press houses continue to sell out to the public unrevised laws.

“The laws sold out by the Assembly Press as the current laws do not represent the present state of the law,” he explained.

He, therefore, tasked the Ministry responsible for the media houses as a matter of urgency to ensure that they sold the current laws, saying, ‘they cannot continue to sell repealed and unconsolidated laws to deceive the public.’

On the provisions on property rights in the 1992 Constitution, which was enacted 20 years ago, Sir Justice Adjei called on Parliament to enact laws to address the confusion associated with it.

Throwing more lights on the challenges of the AMJG, Sir Justice Adjei mentioned affidavit of proof and non-proof of service undertaken by court bailiffs, which he said, was contributing to delay in justice delivery.

“If the problems associated with proof or non-proof of service can be addressed, the key perception of corruption will be removed and the court efficiency will be improved,” he noted.

He also urged the judiciary to equip the court’s registries with computers whose data base would include cases pending as well as the courts handling them to ensure smooth operation of the automation in the filing of court processes.

To his colleagues, Sir Justice Adjei called on them to eschew all semblance of corruption, clothe themselves firmly with the cloak of integrity, and continue to discharge their constitutional mandate with integrity.

He admonished the judges to comply and respect the law in order to restore the eroded public confidence, saying they should be uncompromising when issues concerning integrity were raised.