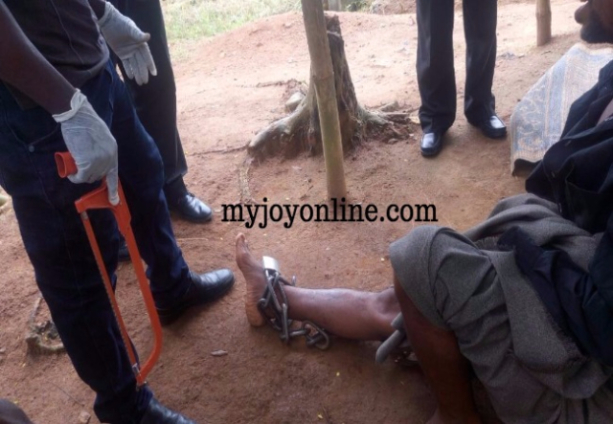 Thousands of people with mental health conditions are chained around the world with some, as young as 10 years, confined for weeks, months and even years against their will, the Human Rights Watch Report has said.

The Report, which was launched virtually, ahead of this year’s World Mental Health Day on October 10, indicated that men, women, and children, were chained or locked in confined spaces in about 60 countries across Asia, Africa, Europe, the Middle East, and the Americas.

The 56-page Report: “Living in Chains: Shackling of People with Psychosocial Disabilities Worldwide,” examines how people with mental health conditions are often shackled by families in their own homes or in overcrowded and unsanitary institutions, against their will, due to widespread stigma and a lack of mental health services.

“Many are forced to eat, sleep, urinate, and defecate in the same tiny area,” it said.

“In state-run or private institutions, as well as traditional or religious healing centres, they are often forced to fast, take medications or herbal concoctions, and face physical and sexual violence.”

“Shackling people with mental health conditions is a widespread brutal practice that is an open secret in many communities,” said Kriti Sharma, Senior Disability Rights Researcher at Human Rights Watch (HRW) and author of the Report.

“People can spend years chained to a tree, locked in a cage or sheep shed because families struggle to cope and governments fail to provide adequate mental health services.”

The Report said while a number of countries were paying greater attention to the issue of mental health, shackling remains largely out of sight.

It noted that there were no data or coordinated international or regional efforts to eradicate shackling.

The Report said in response, the HRW had been working with mental health advocates with live experiences, and human rights and anti-torture organisations around the world to launch a global #BreakTheChains campaign to end shackling of people with mental health conditions.

Based on a study of 110 countries, HRW found evidence of shackling of people with mental health conditions across age groups, ethnicities, religions, socioeconomic strata, and urban and rural areas in about 60 countries.

It said globally, an estimated 792 million people, or one in 10, including one in five children, had a mental health condition.

“Yet governments spend less than two per cent of their health budgets on mental health.”

The report said even when mental health services were free or subsidized, distance and transport costs were a significant barrier.

It said in the absence of proper mental health support and lack of awareness, many families felt they had no option but to shackle their relatives; stating that they were often worried that the person might run away or hurt themselves or others.

Governments should immediately order inspections and regular monitoring of state-run and private institutions and take appropriate actions against abusive facilities, the Report said.