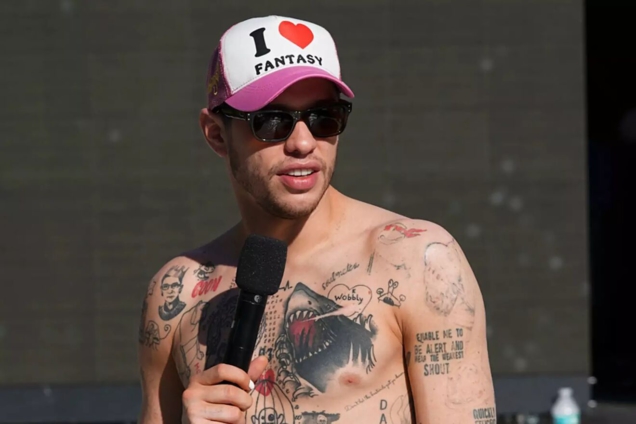 Pete Davidson went shirtless as he enjoyed a trip to Hawaii with rumored girlfriend Chase Sui Wonders over the weekend — and aside from showing off his chest in the ocean, the comedian also revealed his tattoos dedicated to Kim Kardashian seemed to be gone.

The “Meet Cute” star, 29, famously inked his body in tribute to his then-girlfriend, getting several tattoos that referenced Kardashian and even her kids — but the ink was noticeably absent during his romp in the ocean.

Back in October, the star was photographed with a bandage above his left collarbone where his “My girl is a lawyer” tat was, causing speculation that he’d had laser treatments to remove the ink, and the photographs in Hawaii confirm the removal, with the Kardashian tribute nowhere to be seen.

On the other side of his clavicle, the “Jasmine and Aladdin” design he had to commemorate their first kiss during a skit on “SNL” is also gone.

Perhaps the most extreme dedication to Kardashian was the word “Kim,” which the former “Saturday Night Live” star had branded on his chest, but that has also disappeared, notwithstanding a faint scar visible in the middle of his dog tattoo.

Last spring, Kardashian revealed to Ellen DeGeneres that her boyfriend got the brand because of its permanent nature, saying Davidson told her, “I don’t want to be able to get rid of it or to cover it up, and I just wanted it there as a scar on me.”

Along with the brand, the funnyman’s “KNSCP” neck tattoo bearing the initials of Kardashian’s kids has also bit the dust — a decision Kanye West is likely pleased to hear about.

With more than 70 designs covering his body, Davidson said in a 2019 interview with Inked magazine that getting inked was “just a release … When [I’m] so manic and upset, sometimes that’s the only thing that will work for me.”

However, just two years later, Davidson claimed that he planned to get rid of all of his tattoos by the time he turned 30 as he focuses on an acting career.

As for Davidson’s “Bodies, Bodies, Bodies” co-star Wonders, 26, she’s been spotted with Davidson on several occasions in the past month, including a trip to Universal Studios last week when they were photographed holding hands.

It remains to be seen if the “SNL” star will continue removing his past ink in the last year of his 20s or if he’ll pay tribute to the newest woman in his life once again.

DISCLAIMER: The Views, Comments, Opinions, Contributions and Statements made by Readers and Contributors on this platform do not necessarily represent the views or policy of Multimedia Group Limited.
Tags:
Kim Kardashian
Pete Davidson