A witness at the murder trial of Oscar Pistorius has said the South African athlete was responsible for a weapon being fired at a restaurant last year.

Boxer Kevin Lerena told the court that Mr Pistorius had asked the owner of the gun to take the blame.

The 27-year-old double amputee denies intentionally killing her, saying he mistook her for an intruder.

Steenkamp, a model and reality TV star, was shot dead in the early hours of 14 February 2013 at Mr Pistorius's home in the capital, Pretoria.

The arrest of a national sporting hero, who won gold at the London 2012 Paralympic Games and also competed at the Olympics, astounded South Africa.

Mr Lerena, a professional boxer, is the fourth witness to take the stand at the trial, which began at the High Court in Pretoria on Monday.

He testified that he had been in a restaurant in Johannesburg with Mr Pistorius and two other people, including Darren Fresco, in January 2013.

Mr Fresco had passed his firearm to Mr Pistorius and said "I'm one up", meaning there was a bullet in the chamber of the gun, Mr Lerena said.

When the firearm was handed over a there was a shot followed by "complete silence", the boxer added. 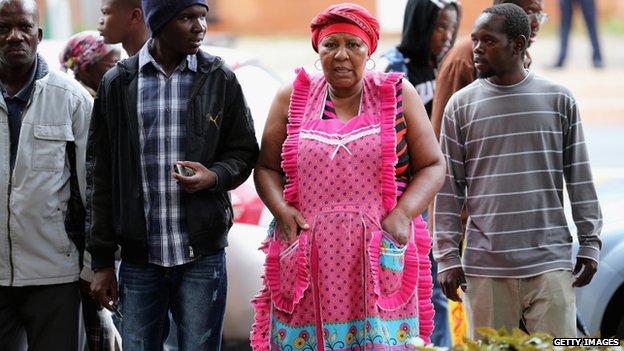 There is intense interest in the case in South Africa

"I looked down, and where my foot was there was a hole in the floor," he told the court. "I had a little graze on my toe, but I wasn't hurt."

Mr Pistorius had apologised and asked Mr Fresco to take the blame, which he had agreed to do, Mr Lerena said.

"Please, I don't want any attention around me. Just say it was you," he pleaded, according to Mr Lerena.

The BBC's Andrew Harding, who is in the courtroom, says the questioning showed the prosecution's broader attempt to prove that Mr Pistorius was trigger-happy.