PNF petitions President for removal of CHRAJ boss from office 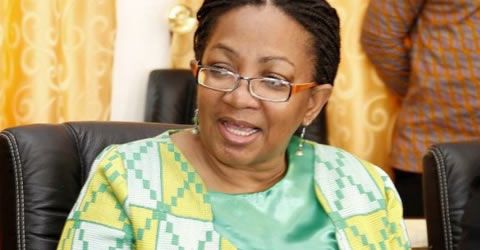 The Progressive Nationalist Forum (PNF) has petitioned the president asking him to exercise his constitutional mandate and suspend Lauretta Lamptey Commissioner for the Commission on Human Rights and Administrative Justice (CHRAJ).

The petition follows a seven day ultimatum to M Lamptey to resign after it was uncovered that she had spent a total of $456.25 per day on hotel accommodation drawn from government purse.

She reportedly rented an apartment at the African Union Village (AU) while renovations were being made on her official accommodation.

The group also enumerated several other misconduct of public officials and asked for serious action be taken in respect of them.

Read deatails of the full petition below.

PNF PETITIONS PRESIDENT FOR REMOVAL OF CHRAJ BOSS FROM OFFICE

We have through our lawyers today filed at the presidency a petition pursuant to our earlier promise to exercise our Article 146 right if the beleaguered Commissioner for the Commission on Human Rights and Administrative Justice (CHRAJ), Ms. Lauretta Vivian Lamptey, failed to take advantage of our  seven-day ultimatum to her to elect to resign.

We are not unaware that an MP announced early last week, just a couple of days after the story broke, that he had submitted one.

We had on the good counsel of our lawyers (led by SAMSON LARDY ANYENINI, ESQ.) sought to offer her the opportunity to gracefully bow out and also to avoid pursuing a process that could pre-maturely turn a wasteful venture if she was minded to voluntarily resign immediately.

We had also at the time been instructed by our lawyers to begin a search for certain material pieces of evidence to enable us make a formidable case that would not only easily survive the first critical prima facie threshold but lead eventually to an outcome that affirms the informed almost national outrage and clamour for her removal from office.

We now believe firmly that our five-page petition of nine-point claims of grave misconduct, inappropriate exercise of office,  serious misjudgement, breaches of laws and public trust, with its various accompanying documents will greatly assist achieve the desired outcome to preserve the reputation of the CHRAJ in the discharge of its core functions of championing Human Rights and Administrative Justice.

We intimated earlier that a part of the grounds of our petition is neglect, failure and/or refusal to discharge her duties in not taking any step to continue investigations into a complaint of corruption, abuse of office and conflict of interest brought on the 11th of January 2010 by the PNF against then CEO of the Ghana Food and Drugs Board, Dr. Stephen Opuni. Not a single step has been taken in almost five years in spite of the fact that her predecessors had completed processes of collecting responses from the Respondent and witnesses including Dr. George Sipa Yankey and especially Dr. Alex Dodoo corroborating our claims which investigations by then SFO had led to the interdiction of the then Board Chairman of the FDB.