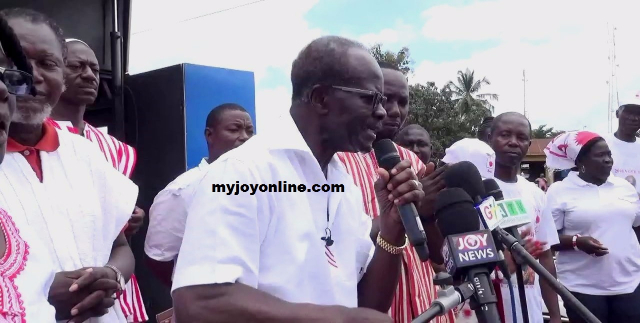 The Progressive Peoples Party says it will deport Chinese nationals engaged in illegal mining in Ghana, if the party is voted into office.

Environmentalists and other concerned Ghanaians have raised issues about the harm illegal mining is doing to the country.

Investigations reveal Chinese and other foreign nationals, together with local collaborators are involved in this negative practice.

PPP Flagbearer, Dr. Nduom who is in the Ashanti region on a campaign tour after addressing students and lecturers at the Spiritan University College told a rally at Ejisu to kick-off his campaign his government will not tolerate the presence of Chinese expatriates who have been engaged in illegal mining, also known as galamsey.

He is disappointed the NDC-administration has failed to deal with the menace which has destroyed the country’s water resources.

According to him, a Dr. Nduom-led government will deport Chinese illegal miners a day after coming into office.

He wondered why Chinese expatriate could engage in illegal mining when we have a President supervising government business.

Dr. Nduom who also introduced the party’s Parliamentary Candidate for the Ejisu Constituency is also worried at the invasion of foreigners in the country’s retail trade, which should have been the preserve of only Ghanaians.

According to him, with connivance of some government officials, Koreans, Japanese and other expatriates have been licensed to engage in fishing at the expense of the locals at the coasts.

He promises a more conducive business environment for Ghanaian businesses under a PPP government.

Dr. Nduom and his team took the campaign trail to the Ejisu Market where he interacted with market women. The elated market women abandoned their stalls and sheds in ecstasy to welcome the Flagbearer of PPP as they tout him “Adwumawura” with Dr. Nduom  raising his hands up in     the air in response.

He later addressed similar rallies in the Manhyia South and North and the Nhyiaeso constituencies.