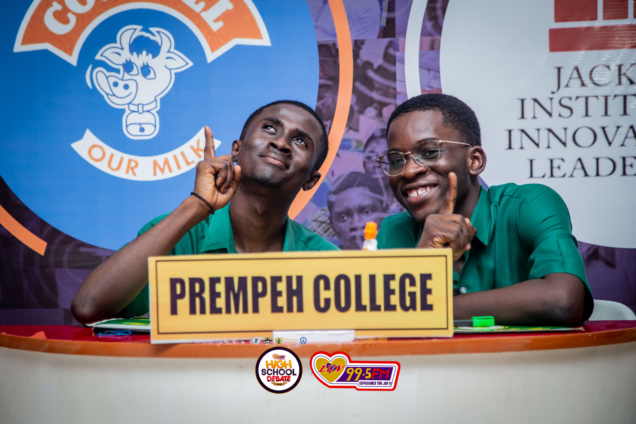 PREMPEH COLLEGE after the final whistle

High hopes turned into disappointment for KNUST SHS, as Prempeh College sent them parking after a thrilling round of contest in the Luv FM High school debate.

The former finalist, Prempeh College, put up an outstanding performance as they debated their stance on the motion, “Government should be held accountable for flooding situation in Ghana.”

Students of KNUST SHS entered the auditorium with heavy chants in anticipation of a victory in today’s contest.

However, after a series of exchanges in their arguments, Prempeh College stood tall, claiming the contest with 276 points against KNUST’s 254 points.

Though Prempeh College lost the overall title last year, they are hopeful they can go on to reclaim what is theirs in this year’s edition.

“The other schools should note that they have come against God when they meet us.”, the Amanfour asserted.

Despite losing the contest, Principal Speaker of KNUST SHS, Whitney Amponsah was crowned the best Debater of the contest.

It will be live on radio and Facebook on@luvfm995 and on Joy Learning and Joy Prime on television.