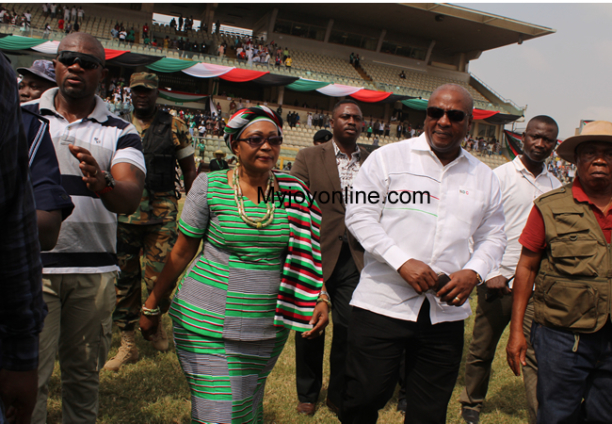 The President is expected to address the congress that would elect the party’s national executives who will steer the affairs of the party, and direct them in the 2016 general elections.

About seventy (70) candidates are slugging it out for 15 national executive positions at the party’s delegates' congress on Saturday December 20 in Kumasi. About 4600 delegates are expected to cast their ballots to elect the NDC’s leadership for the next four years.

There has been intense lobbying by various camps to get their favourites elected as the election committee has ruled out the opportunity for the respective candidates to address the delegates.

Dressed in a white shirt with black trousers, the President stormed the stadium with his wife Lordina around 10:30am, shortly after the arrival of the Vice President Paa Kwesi Bekoe Amissah-Arthur.

Founder of the party, former President Jerry John Rawlings arrived to a tumultuous reception by delegates and all gathered at the stadium around 11:15am.

His thunderous arrival brought all activities to a standstill, as all attention and homage were directed at him.

There is heavy security presence in and around the Baba Yara Sports Stadium.

Ashanti Regional Commander, DCOP Kofi Boakye told the media yesterday: “We have increased our manpower to combat any unforeseen circumstance. At least we have about 450 men from outside the metropolis to augment our strength. So in all we may use about 700 men to police the city and also the stadium.”

Chairman of the Party, Dr. Kwabena Adjei has officially opened the congress.