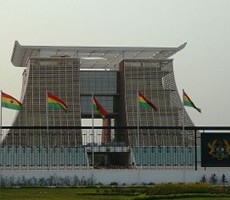 President John Mahama has officially relocated to the Flagstaff House even though some security concerns have yet to be addressed.

This marks a new era in the history of Ghana after more than five decades of conducting all government activities at the Osu Castle.

Speaking at a short ceremony Thursday at the Flagstaff House, the president expressed confidence that the issues yet to be resolved do not pose any serious threats.

He said physical defects in the building have been corrected and that the committee working on the relocation is putting the finishing touches on the residence at the new seat of government, which is expected to be completed by June this year.

Therefore, the president will be working at the Flagstaff House but will not live there until the completion of work on his residence at the seat of government.

The president was escorted to his new office by Chief Justice Georgina Theodora Wood in the company of former President Jerry John Rawlings, Chief of Staff Prosper Bani and other government officials.