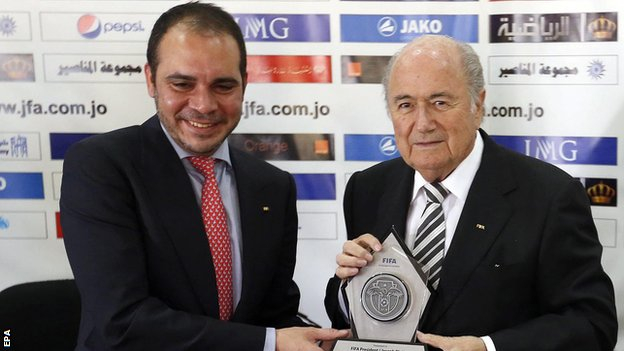 The Jordanian Prince, 39, will stand as a candidate at Fifa's presidential election on 29 May, where Blatter, 78, will seek a fifth term of office.

Prince Ali said: "It is time to shift the focus away from administrative controversy and back to sport.

"The headlines should be about football, not about Fifa."

Prince Ali said he had been encouraged to stand by colleagues.

"The message I heard, over and over, was that it is time for a change," the head of the Jordanian and West Asian Football Federations said.

"The world game deserves a world-class governing body – an international federation that is a service organisation and a model of ethics, transparency and good governance.

"Fifa exists to serve a sport which unites billions of people from all over the world, people of differing and divergent political, religious and social affiliations, who come together in their enjoyment of 'the world's game'."

Ethics investigator Michael Garcia resigned last month in protest over the handling of his report into bidding for the 2018 and 2022 World Cups in Russia and Qatar.

Fifa cleared both bidding teams of corruption following a series of allegations and said the tournaments would be staged in the countries chosen.

Meanwhile, BBC Sport revealed that secret talks between Fifa officials and Blatter, who has been president since 1998, took place over his future as leader of football's governing body.

Former diplomat Jerome Champagne, 56, who joined Fifa in 1999, is the only other challenger to have confirmed his intention to challenge for the presidency.

Candidates wishing to declare their interest must do so before 29 January.