Prince Asumadu and Wisdom Ndukwe sworn in as UG-SRC President and Vice-President via Zoom - MyJoyOnline.com 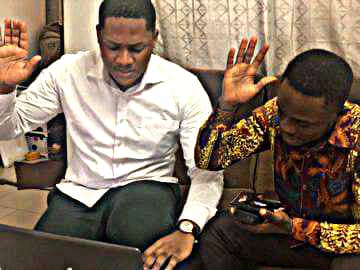 Two final year students at the University of Ghana, Prince Asumadu and Wisdom Ndukwe have been respectively sworn in as the President and Vice-President of the Students Representative Council (SRC), in a brief ceremony which took place via Zoom on Monday, April 25, 2022.

The swearing-in followed a ruling by the SRC’s Appeals Board on Monday, which dismissed an appeal by Samuel Amos Ofosu (‘Nana B’), challenging an earlier decision by the SRC’s Judicial Board on April 7, 2022.

According to the appellant, Nana B, the SRC Judicial Board erred when it ordered that Prince Asumadu and Wisdom Ndukwe should be sworn-in, following a declaration by the SRC Electoral Commission on November 1, 2021.

In his view, the decision by the Judicial Board did not reflect the position of the law; adding that, in giving its ruling, the Board failed to consider the evidence that was adduced before it.

But ruling on the appeal, the SRC’s Appeal Board, which was chaired by Dr. Samuel Obeng Manteaw, stated that the claims and concerns of the appellant were without merit.

Other members of the Board, including Professor Emmanuel Debrah, Abigail Nakuor Wowolo, Maame Serwaa Tuffour, Pearl Abla Ahiataku and Frank Asare also agreed with this position.

In their unanimous ruling, the Board explained that, contrary to the argument of the appellant, the extension of voting by three hours, by the Electoral Commission at Mensah Sarbah Hall, on the day of voting, was an appropriate decision.

It further added that, the EC exercised its discretion in a fair and unbiased manner.

In the overall circumstances, the Board said, “We conclude therefore, and agree with the judgment of the SRC Judicial Board that, the irregularities that occurred in Akuafo Hall were fairly dealt with and that even if the undeclared votes were added to the Appellant’s results, the outcome of the elections would not be so substantially affected. The irregularities were therefore not so substantial as to occasion an annulment and or rerun of the elections at Akuafo Hall.

We are satisfied that the appeal is without merits and same should be refused. The grounds of appeal are hereby dismissed as unmeritorious. The Judgement and Orders of the Judicial Board dated 7th April, 2022 are hereby affirmed.

We make further recommendations for the SRC and relevant stakeholders to use the experiences from this 2021 SRC Elections to collaborate and research on, as well as implement ways of further improving upon election processes in the University of Ghana. Appeal is dismissed”.

In October last year, the Electoral Commission of the University of Ghana, Legon, declared Prince Asumadu and Wisdom Ndukwe as President and Veep elect in the 2021 Student Representative Council (SRC) elections.

This SRC presidential race was a run-off following the inability of all the four competing teams to secure the needed 50 per cent plus one vote (50%+1) in an earlier exercise.

In the earlier election, Samuel Amos Ofosu and running mate, Alfred Acquah led the presidential polls after they garnered a total of 5,760 votes representing 41.97% of the total valid votes cast.

This was followed by Prince Asumadu and his running mate, Wisdom Ndukwe, who managed to secure a total of 5,102 votes, representing 37.18% of the total valid votes cast.

But after Prince Asumadu and Wisdom Ndukwe won the run-off, Samuel Amos Ofosu, took the matter to the SRC Judicial Board, leading to a series of legal tussles since October last year.

As a result, the SRC Secretary, Stephanie Naadu-Antwi was sworn in as the Acting President of the SRC, until all the outstanding issues have been addressed.

The ruling by the Appeals Board on Monday, however, has brought finality to the brouhaha, as Prince Asumadu and Wisdom Ndukwe will now take over the reins of the SRC, for a one year tenure.