Rapper convicted of having his mother murdered

An aspiring rapper has been sentenced to 99 years in prison after paying to have his mother killed.

30-year-old Qaw’mane Wilson – who performed under the name Young QC, ordered a hitman to kill Yolanda Holmes back in 2012.

He was convicted on Friday in Chicago alongside the hitman Eugene Spencer, who received a 100 year sentence.

The court heard how Wilson cleared his mum’s bank accounts out after her death.

“Whatever he wanted, his mother gave to him. A car. A job. One could say he was spoiled. She gave Qaw’mane life, and it was his choice to take it away from her.” 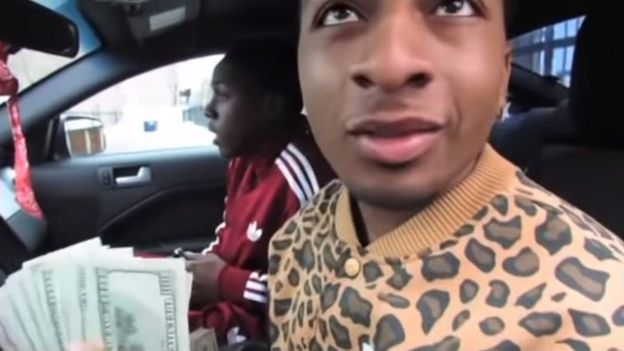 QAW’MANE WILSON/ YOUTUBE. In a video on his YouTube channel, Qaw’mane Wilson and his friends are seen withdrawing cash and giving it crowds of people

After her death, Wilson used his mum’s money to customize the Mustang she had bought him and evidence was shown to the jury of him withdrawing large amounts of money and later throwing cash into crowds of people at one of his shows.

Wilson, who was 23 at the time of her killing, ordered Spencer to enter her apartment in Chicago, where he shot her in her sleep.

When asked if he had anything to say before the verdict was given, Wilson said: “I just want to say, nobody loved my mother more than me. She was all I had. That’s it.”