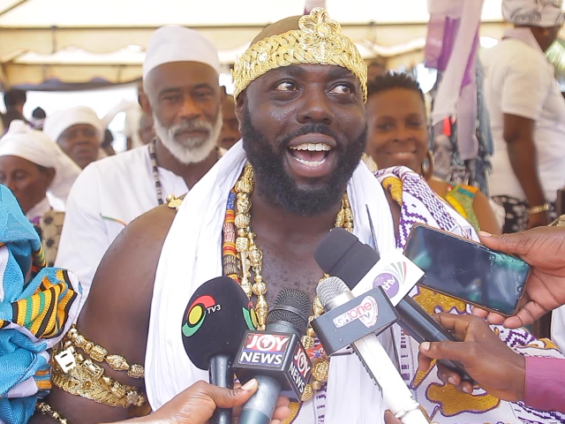 A black-American tour operator and entrepreneur, Rashad McCrorey, has been enstooled as the Tourism Chief of Elmina.

As the Tourism Chief (Nserahwehen) of Iture, a suburb of Elmina, McCrorey has the stool name “Nana Kofi Kukudurfo I.“

Mr McCrorey has lived in Ghana since February 2020 and is the owner of Africa Cross-Culture, a tourism company which specialises in organizing trips to the African countries of Egypt, Ghana, Kenya, Nigeria, Rwanda, and Uganda.

Addressing the media after his installation, the chief called on black Americans to return home to help build the communities they originally came from.

According to him, there’s no better feeling than sleeping and waking up in a place where you are always welcome.

“There’s more opportunity here. In America, we deal with police brutality, environmental injustice, and so many other situations that are uncomfortable. But over here in Ghana, you have a chance to be free. You have economic freedom here. You wake up every day just being a man and not a black man in America. My sisters wake up every day being women and not black women in America, “he stated.

He encouraged black Americans and the people of the diaspora to return home to Africa, especially Ghana.

“I want to focus on infrastructure and scholarships. Iture, for example, is the gateway to Elmina. Coming from Accra, you can’t get to the saved dungeons at Elmina without passing through Iture. There’s a need to build the place and make it more attractive, “he said.

Mr. Rashad encouraged the government of Ghana to continue to invest in the tourism sector because there is enormous potential.

He swore the oath of allegiance to the Omanhen of the Edina traditional area, Nana Kojo Conduah, and was taken through a series of traditional rites and performances.

He is recognized as an American expert figure in travel and repatriation to Africa. McCrorey, who is also a journalist for Modern Ghana, has contributed substantial articles promoting African and African Diaspora relations.