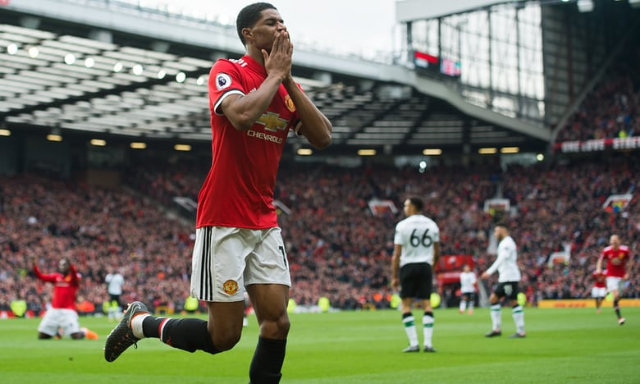 Marcus Rashford scored twice as Manchester United held on to beat Liverpool and strengthen their grip on second place in the Premier League.

The win meant Jose Mourinho's side closed the gap on runaway leaders Manchester City to 13 points – at least until City play at Stoke on Monday – but, more pertinently, they are now five points clear of the third-placed Merseysiders.

Rashford, making his first league start since 26 December, will rightly grab the headlines but Romelu Lukaku was instrumental in both goals, and Liverpool simply could not deal with his physical power in the first half.

First, the Belgium striker's header from David de Gea's clearance found Rashford charging into the visitors' box, and he cut inside Trent Alexander-Arnold before firing into the bottom corner.

For United's second goal, Lukaku held up the ball from another goal-kick before feeding Juan Mata and, although he could not get a shot away, the ball fell for Rashford to score via a slight deflection from Alexander-Arnold.

At that stage, Liverpool were second best in every area of the pitch and could have fallen further behind when Mata volleyed acrobatically wide from an Alexis Sanchez cross.

Jurgen Klopp's side improved dramatically after the break and, with United defending deep, the visitors cranked up the pressure without ever really opening up their hosts.

It took an own goal for the Reds to reduce the deficit when Eric Bailly turned Sadio Mane's cross past De Gea while attempting to clear at the near post.

That gave Liverpool's travelling fans hope but their side could not fashion any further clear chances, even in six often chaotic minutes of stoppage time.

United survived to clinch victory in the first of three games here in the next seven days that will shape their season.

Next up are Sevilla on Tuesday, with a place in the last eight of the Champions League at stake, before they face Brighton in the FA Cup quarter-finals next Saturday.