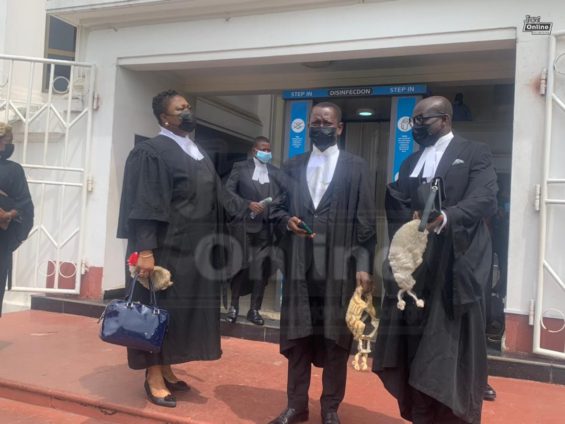 Retired Justice of the Supreme Court Clemence Honyenuga says he will continue to hear the trial of former COCOBOD CEO, Dr Stephen Opuni, despite retiring as a judge two months ago.

He made this declaration when he delivered his ruling on an application by lawyers for Dr Opuni.

Lead Counsel Samuel Codjoe had urged the Judge to restrain himself from hearing the matter.

Justice Honyenuga has since March 2017 been hearing the case as an additional High Court Judge.

His tenure as a Supreme Court judge terminated on September 4, 2022, when he attained the age of 70.

The Judge however says the Chief Justice had prior to the said date granted him an extension to continue hearing the matter.

Mr Codjoe however argues the Chief Justice lacks the mandate to grant such an extension.

He said an extension cannot be granted to a person who is no longer a judge. He insisted only the President can grant such an extension.

“Since we came back from vacation we have come to this court not less than three different occasions and this order has never been set aside by this court. We are submitting that the CJ engaged in an unconstitutional act when he purported to extend the tenure of your lordship under 144(11). “

He continued that the President is clothed with such power under article 145(2a).

“Under article 144(9)… it is quite clear that the person to be appointed need not be an existing judge unlike under 139(1c) which by its provision all Court of Appeal and Supreme Court are potentially high court judges,“Mr Codjoe stated.

She argued the appointment and removal from office of a Justice of the Superior court are different from an extension granted to a judge previously hearing a case to continue with the matter for a limited period of time and that the constitution handles them differently.

“There is no confusion about the fact that it is the president who appoints the chief justice, the Supreme Court, the Court of Appeal and high court judges. Article 144 deals with such appointments and 146 deals with their removal from office.

“In articles 144 and 146 the drafters of the constitution clearly said it is the president who appoints and removes justices of the superior court. Nowhere in article 139 or 145(4) is the president mentioned.”

She urged the court to dismiss the application.

Justice Honyenuga dismissed the application. He stated that the Chief Justice as the administrative head of the judiciary has the power under the constitution to grant an extension to a retiring judge.

The extension he explained was granted long before the date of retirement.

The case has been adjourned to November 16 for continuation.

The former COCOBOD CEO Dr Stephen Opuni has been charged with willfully causing financial loss to the state to the tune of ¢2.1 billion in three separate contracts for the supply of fertilisers.

DISCLAIMER: The Views, Comments, Opinions, Contributions and Statements made by Readers and Contributors on this platform do not necessarily represent the views or policy of Multimedia Group Limited.
Tags:
COCOBOD
Dr Stephen Opuni
Justice Homyenuga
Supreme Court