Revolutionary Minds: 35 year old farmer and father of 4 returns to SHS after 14 years out of school 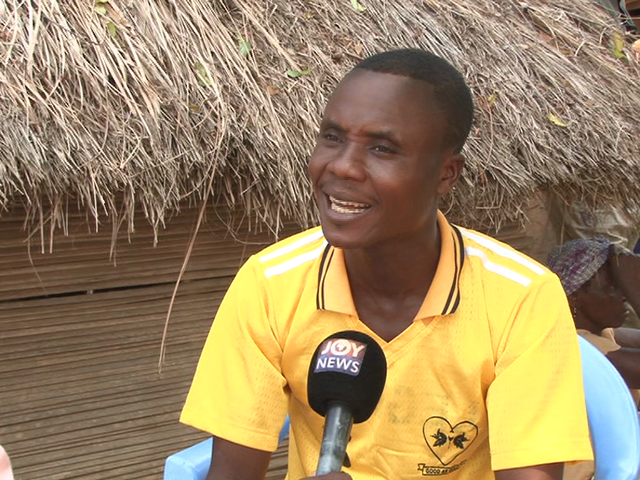 “When financial constraints break the educational ladder on people, they should not end up on the streets as hustlers. They should end up on the road back to school no matter how long it takes because education matters.”

That appears to be the inspiration that has guided 35 year old Ernest Akpaloo, a farmer, father of four, and student in one of the most deprived communities in the Akatsi North District of the Volta Region, Nyitavuta.

This community into which Ernest was born has no electricity connection, no health post, no clean source of drinking water, no asphalted road, and all houses there except the school block are built of mud and roofed with thatch. The community is clad in poverty and painted in deficiency. So, Ernest has breathed deprivation all his life.

The only school in this community for the hundreds of young people ends at primary six. So, no young person dreams bigger than education beyond primary school. For those who dare dream further education and wake up to act on it, the nearest Junior High School (JHS) is a 50 mile walk away. Majority of the children here don’t venture. They turn to tilling the lands for the rest of their lives, and end up perpetuating the cycle of poverty in the community.

Ernest refused to fall prey to this syndrome when he was a younger man. After completing primary six in the community, he managed to attend JHS about one and half hours walk away on daily basis. He completed JHS in 1999. And that is where the house of cards collapsed. Despite securing good grades in the Basic Education Certificate Examination, unavailability of further educational opportunities and financial difficulties forced him to drop out of school.

“Due to financial problems, I had to stay home for 14 good years,” he told the REVOLUTIONARY MINDS team with a smiley face.

In a community where the height of success is measured by nothing more than owning a few parcels of farming lands and making many babies, no one believed in the need to support Ernest’s pursuit for higher education.

But Ernest did not give up on his dreams. He made a conscious decision to work his own path up the education ladder without relying on family and friends. So, every morning, he would wake up early before sunrise, make his way to a family plot of land deep in the bushes of Nyitavuta, and spend the rest of the day weeding and sowing seeds.

“I was farming maize, cassava and groundnut to raise money and go back to school,” he explained.

After a decade and half of the above daily routine, in 2013, through a lot of hard work and determination, Ernest was able to gather enough money to return to school. He enrolled at the Sunrise Christian High School in Akatsi, to continue the pursuit of a long held dream that for a protracted period had been thwarted by poverty.

By then, the boy in him was gone. He walked into SHS to become a school man, not a school boy as would normally be the case. Ernest had grown a lot of beard, his palms hardened after several years of throwing cutlasses about, his voice has become deeper, and he is now a married man with four children.

The decision to go back to school was met with a lot of push-back from both family and friends. Recurring questions about the relevance of education for a man who per the community’s standards has achieved success already; what would happen to the farms his family survives on and is providing finances to push the children through school once the man of the house himself goes back to class; the likely stigma he would face staying in class with young ones he can give birth to and being taught in class by persons he is far older than…. These are just a few of the predicted challenges.

But the motivation to return to school was far greater than any form of discouragement that could possibly rain on him.

“One day, I want to come back to my community to let them know that education is the key for development,” Ernest said. “That is why I am doing this,” he added.

True to the predictions, it’s not been business as usual, but tough being back in school for Ernest.

“It’s not easy…I am old and still staying with people at the age of 15, 16….when the teachers give us test and some of them get 10 over 10 and I get five over 10, then they will be laughing at me,” Ernest said.

Anytime school is on vacation, or on holidays, he makes the two hour journey back home to look after his farm and ensure the line of support for him and his family does not break. But financially, it’s not been easy either. Beyond farming, he has added charcoal production to his business to raise additional income to support his education and family.

But Ernest does not intend giving up. Now in his final year, Ernest looks forward to pursuing his degree next year, acquire post graduate qualifications, and take up a teaching job in one of the tertiary institutions in the country, while expanding his farms and turning it into a well structured entrepreneurship venture. His believe is simple. “There is nothing in this life you cannot achieve if you put your mind to it,” he explains.

For Ernest’s four children, one of whom is in JHS, the other class five, one in class four and another in Kindergarten, they are proud of their father and what he is trying to accomplish, although his determination continues to amaze them.

“Sometimes the kids ask me daddy, why is it that it’s at this time that you are going to school, and I usually tell them the story, and promise them they will not have to go through this,” Ernest said.

Ernest is now a role model in his community, Nyitavuta, with a lot of young people there looking up to him for the needed inspiration to take education more seriously than the community has in the past.

The REVOLUTIONARY MINDS Project wishes him well every step of the way…..

This article by journalist Joseph Opoku Gakpo is the first in a series of articles by the REVOLUTIONARY MINDS project to put the spotlight on unnoticed individuals engaged in radical stuff in their communities. The focus of the project is to tell the stories of people, particularly, young persons, engaged in activities they would ordinarily not be doing. On the last Monday of every month, the project will publish the story of one “Revolutionary Mind” on www.josephopokugakpo.wordpress.com, and this website and aggressively share the story on social media to the reach of as many people as possible. The objective of the project is to inspire all young people to do something daring and ground breaking in their communities.

REVOLUTIONARY MINDS…. Do something Daring.