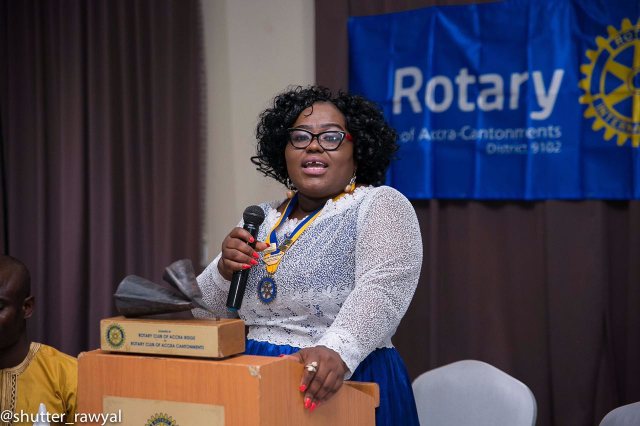 Rotary Club of Accra Cantonments last Saturday launched five major projects in aid of the underprivileged in the society through a fundraising comedy-dinner night at the Swiss Spirit Alisa Hotel.

The event, which drew Ghana’s finest comedians DKB and Foster, was aimed at giving the audience an avenue to enjoy themselves after a peaceful election and also motivate them to raise funds for the club’s new projects.

In her speech, the President of Rotary Club of Accra Cantonments, Audrey Addo-Mensah reiterated the fact that civil society are not doing enough to support the under privilege in our various communities.

She suggested that every corporate organisation should at least take up one project in their area of locality that will go a long way in making sure that poverty is eradicated and the humanity is served with the essential social amenities that is needed to reduce societal issues.

President Audrey expressed her utmost gratitude on behalf of the club to corporate organisations that partnered the club to make their new projects a reality.

The projects launched included a borehole project for the people of Nsakina in the Ga South district, upgrading and rehabilitation of a KVIP facility in Somanya, a medical outreach for the people of Akrade in the Eastern Region, a newly constructed clinic for the Osu Borstal home and a metallic bus shed on the Elwak to the 37 stretch.

The club also took the opportunity of the event and inducted three new members into the Rotary International fraternity thereby increasing the number of people ready to serve humanity and advocate the agenda of eradicating polio which gives meaning into the rotary slogan – Service Above Self.