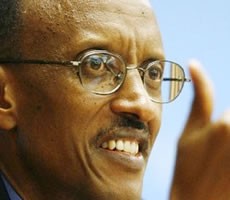 Rwanda has been elected to sit on the United Nations Security Council for the next two years.

The vote comes a day after a leaked UN report said Rwanda was supporting a rebellion in neighbouring Democratic Republic of Congo.

Five non-permanent seats to the 15-member council were decided at the United Nations on Thursday.

Argentina, Australia, South Korea and Luxembourg have also been elected to sit on the Security Council.

According to a confidential report by the UN Security Council’s Group of Experts, seen by Reuters news agency, Rwanda’s defence minister was relaying military orders to M23 rebel leaders who have been fighting DRC’s army since April.

The experts also accused Uganda of backing the rebels.

Both governments in Kampala and Kigali strenuously denied the allegations.

The DRC raised a formal objection to Rwanda’s candidacy but one of Kigali’s UN diplomats said voters would not be swayed by the “baseless report”.

Rwanda will take the seat currently filled by South Africa on 1 January.

BBC UN correspondent Barbara Plett said there was a well-established pattern of rotation on the Security Council, with eastern Africa due to take the African seat for 2013-14. There was an agreement to put Rwanda forward, and no other country contested it, she said.

In a statement, Rwandan Foreign Minister Louise Mushikiwabo said her government could offer a unique perspective on matters of war and peace because of the 1994 genocide in which a million Tutsis died.

The contrast could not be sharper between now and 1993-4 “when a genocidal government occupied a prized Security Council seat,” she said.

Philippe Bolopion, UN Director of New York-based campaign group Human Rights Watch, said that with a seat on the Security Council, Rwanda would be in a position to block any sanctions against its officials.

“If they were, after being elected to the UN Security Council, to immediately stop all their support to M23 that would be great news. But nothing in their recent behaviour would suggest that it would happen,” he told the BBC World Service’s Focus on Africa programme.