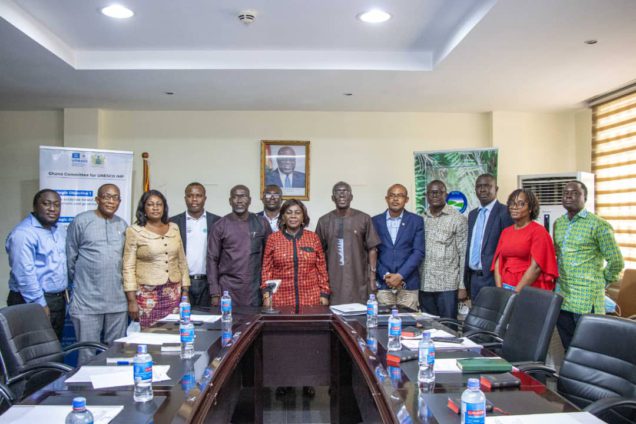 The Ghana Committee for UNESCO IHP has been revived by the Sanitation Ministry at an inaugural ceremony that saw a 15 member committee drawn from various agencies and institutions to support the implementation of its mandate.

The committee will work to advance the cause of the  United Nations Educational, Scientific and Cultural Organisation (UNESCO) Inter-governmental Hydrological Programme (IHP) activities in Ghana.

Hon. Cecilia Abena Dapaah, the Minister for Sanitation and Water Resources, inaugurated the Committee mentioned that UNESCO IHP focused on water sciences and resources management to address the emerging needs of its member states to promote international cooperation.

She noted that the programme seeks to specifically serve member states to upgrade their knowledge on various processes; physical, ecological, cultural, economic and social processes that regulate or concern water quantity and quality and distribution in space and time and interaction with nature and prop genic systems.

The Minister stated, “In this context, the UNESCO IHP is a scientific cooperation programme with primary goal of supporting member states to implement sustainable water management”.

Madam Dapaah expressed a concern that Ghana’s water resources situation had revealed a depletion and degradation of some freshwater resources; this she said is due to the increase in human settlement, rapid urbanization, poor agricultural practices, illegal mining and uncontrolled logging activities.

Adding that the situation had also increased pollution of the water bodies and set a heavy demand on the water leading to conflicting water uses.

At the transboundary level, she stressed that the main issues were; transboundary pollution, accidental flooding, spills from upstream reservoirs, protection of local communities, and existing and future investments.

She called on all stakeholders to do more in their collective efforts to protect and sustain the water resources.

“The Ghana Committee for UNESCO IHP, which has been dormant for some time, and its revival is a critical component of the country’s water governance framework.

“It is the institutional focal body, which will serve as an advisory body for the government on UNESCO IHP while providing inputs to shape national research and policies on hydrological issues in Ghana.

The Minister charged the Committee members to undertake their work by pursuing the process of consensus-building through effective participation and improving partnership among the member institutions.