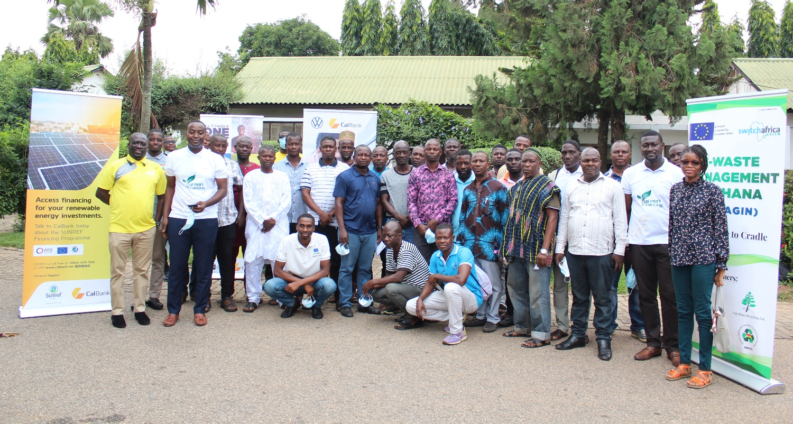 The project is expected to assist informal scrap dealers, electronic waste managers and MSMEs alike to relook their activities, do away with their old approach of waste management.

“If you visit their sites, you see thick smoke and other unhealthy activities. It is because either they have the tools but they do not know how to use them or they are not aware of the environmental consequences”, Project Manager of E-MAGIN Project Ghana, Daniel Ofori observed.

Officials reveal the project will also train beneficiaries in the implementation of the business fundamentals in addition to how to employ proper health and safety measures in their operations.

“… the fact is that if they do it well, they stand the chance of making more than what they are getting because they are not using the right approach that is why they are earning less than the efforts they put into the work.”

Mr. Ofori spoke at the sidelines of the ‘Access to Finance and Progress Workshop,’ in Kumasi, for Micro, Small and Medium Enterprises (MSMEs) in the e-waste sector, as part of the E-MAGIN Project.

E-MAGIN is a four-year project that aims to improve the management of e-waste in Ghana towards sustainable consumption production.

Launched in 2018, the project is funded by the European Union, and being implemented by the University of Cape Coast, Adelphi (Germany), Ghana National Cleaner Production Center (GNCPC) and City Waste Recycling Limited.

E-MAGIN is to contribute to the effective implementation of the Hazardous and Electronic Waste Control and Management Act 917 through the formalization of informal Micro Small and Medium Enterprises (MSMEs), the establishment of a collection mechanism for e-waste, build the capacity of the MSME’s to adopt the best dismantling practices, providing information support and creating awareness among the key target groups of the action.

The project which started in 2018 has made significant progress in enhancing the economic fortunes of the participating MSMEs across the country.

Since it began, it has also provided several capacities building training mainly in health and safety and business fundamentals and formalizations.

“We need to strengthen the scrap associations, and then they can monitor their members, to collect the scraps and send them to the centers where they can be transported to a formal recycler to do justice to the goods without the burning and other environmental issues that accompany it”.

Prior to this initiative, the government passed the Hazardous and Electronic Waste Control and Management Act, ACT 2016, which as part points at the establishment of proper collection centres.

Managers of this project also used the sensitization to train the participants on the ACT, equip them on how to take advantage of the provisions to grow their businesses.

The guidelines also says that a collector has the responsibility to send the e-waste to a collection center from where it will be given to a formal and registered recycler which will address the indiscriminate and improper burning of the e-waste.

“We started by taking them through the ACT, certain portions they need to obliged before they can formally apply. Progress has been made because now some have acquired lands from the MMDAs and in the process of seeking financial assistance to engage in them. We also help to acquire the necessary equipment to start,” Ofori added.

E-waste contains a lot of valuable components if properly managed and recycled. But the inability to ensure the proper regulation of the activities of those involved undermines the health of the people directly affected.

But Mr Kumi, observes weakness in the application of the law is to blame for the refusal of some scrap dealers to halt their activities which pollutes the environment.

He said it would be the advantage of the country to regulate and provide the needed facilities for the sustainable management of the increasing volumes of electronic waste.

Because of this, he believes strengthening scrap dealers’ associations is key to contributing to the recycling drive and reducing indiscriminate e-waste burning.

Other Efforts
The second study of the project– TRUST BE KEY – looks at different ways that can be explored to formalize the informal sector of e-waste especially through partnerships.

The project is assisting individuals and associations of scrap dealers to establish collection centres, and apply for EPA permits in order to set up.

“We are acting as mediators, the real onus lies on EPA, MESTI and its government institutions to assist scrap dealers and the private sector to establish these centres.”

Mrs Leticia Nyaaba works at the EPA at the Ghana National Clean-Up Centre (GNCC) at the Environmental Protection Agency (EPA).

She says the dilemma of the scrap dealers who have to collect the scraps but are often stuck because the treatment facilities do not exist in the country and so the volume keeps building up.

The only way is to burn them which also affect the environment.

According to her, they have and continue to train the beneficiaries to sort the plastics, and e-waste into the various strains.

“it has a value chain from the beginning to the end. We try to build the capacity and create the awareness so that they will move from the negative activities.… simple techniques of how to sort them out and that have become a business stream for some of them,” she revealed, “So they are able to take the e-waste plastics, sort them, and shred and sell to these companies that produce other items out of it like pavement blocks etc.”

As part of sustainability, the project is trying to see if there will be companies who will come into the country ready to take care of some of these negative fractions from the process.

In the long term, Mrs Nyaaba, says it will change what is known as the business-as-usual operations of scrap businesses into a more environmentally sustainable one.

Meanwhile, booklets containing all the skills beneficiaries have been trained in have been published and translated in local languages for easy access.