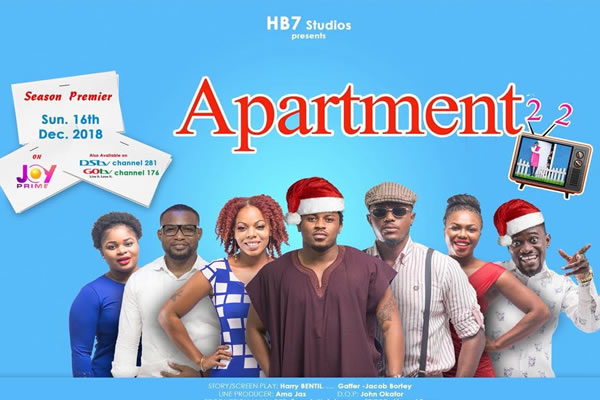 Season 2 of Apartment 22 TV series has been successfully launched and approved to be aired on Joy Prime, Ghana’s No.1 entertainment channel.

Apartment 22 will start showing at 7 pm on Sunday, December, 16 exclusively on Joy Prime.

As part of the channel’s initiative to support and invest in locally produced content, especially in the African movie sector, Apartment 22 has been added to the list of G-rated [Parental Guidance adviced] programmes on the channel.

Harry Bentil, an actor and director of the Apartment 22 series promises exciting episodes in the latest season about to be aired.

The TV series tells a story about what some would say is the largest source of systematic segregation, the battle of the sexes.

As we move forward into the future and have broken some of these borders between men and women, we see their cohabitation occurring in many more situations like gender-neutral clubs, groups, bathrooms and dormitories in schools.

However, some of these concepts are still new to men and this is clearly the case for Dr Tieh, the star of the show, as he adjusts to his new living situation with not just one but actually three extraordinary women.

Tune in to Joy Prime Channel on Multi TV this and every Sunday at 7 pm for amazing episodes of the Season 2 of Apartment 22.