'See something, say something campaign': Everybody must get involved – Osafo-Maafo - MyJoyOnline.com

‘See something, say something campaign’: Everybody must get involved – Osafo-Maafo 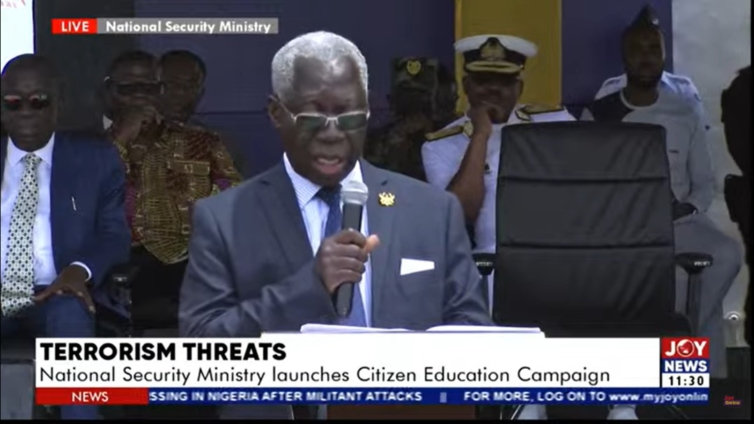 The Special Adviser to the President, Yaw Osafo-Maafo has called on the citizenry to get involved in the government’s efforts to clamp down on threats of terrorist attacks.

Speaking at the launch of the ‘See Something, Say Something’ Campaign on Tuesday, Mr. Osafo-Maafo said it is the responsibility of every Ghanaian to ensure that the nation is protected.

In view of that, he called on all and sundry to contribute their quota to see that the fight is successful.

“If we are going to succeed in this fight, it is everybody’s action. Everybody must get involved to protect our motherland,” he stressed.

The Senior Advisor further expressed worry that for the first time some Ghanaians have become attracted to terrorist activities.

He noted that although Ghana has not yet experienced a terrorist attack, it is prudent that proactive measures are taken.

Mr. Osafo-Maafo, therefore, impressed upon all citizens to have a core responsibility to help fight and protect the country.

“The fact that we have not been attacked yet doesn’t mean we are immune from it. Certainly not, deliberate actions and conscious efforts not only by our state security and intelligence agencies but all Ghanaians and persons within the jurisdiction are required to keep the terrorist away.”

For him, the over 340 attacks recorded within the first quarter of the year in the area indicate that the Sub-region had become a hotbed for terrorism and, therefore, the need to create awareness on security consciousness among the citizenry.

See Something, Say Something Campaign

The “See something, say something” campaign is part of efforts to help deal with the terrorist threat in the West African sub-region.

This means any person who notices anything unusual about the security situation, should inform the various agencies by dialing 999 (toll-free) or using any of the security agencies’ phone numbers or social media handles.

For those who don’t want to be identified for fear of being labelled as snitchers, the complaints can be lodged anonymously too, the security agencies have announced. You can as well report to assembly members, District Chief Executives, chiefs, opinion leaders, presiding members and community leaders.

Terrorist attacks in the sub-region

On May 11, 2022, terrorists were reported to have killed 10 soldiers in neighbouring Togo.

About 15 assailants were killed during the “terrorist” attack last week in the north of Togo that also killed the 10 soldiers.

Togo’s troops have been deployed in the north of the country to contain a security threat pushing south from Mali, Burkina Faso and Niger where groups linked to al-Qaeda and ISIL (ISIS) operate.