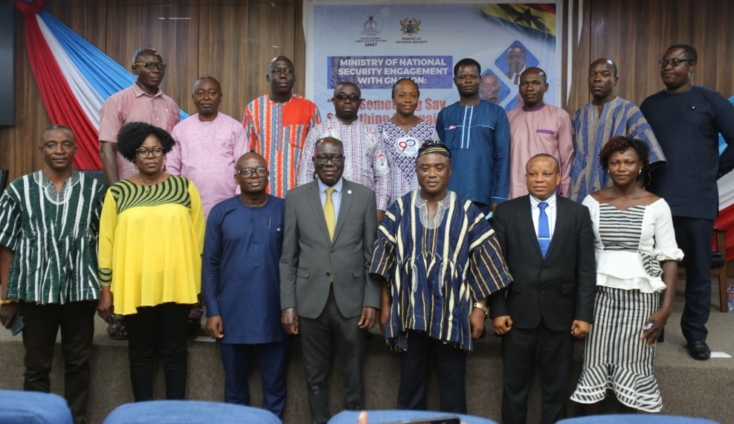 Teachers across the country have been encouraged to join forces with the government to deal with the rising threat of terrorism.

This follows an engagement between the Ghana National Association of Teachers (GNAT) and the National Security Ministry on the newly-launched ‘See Something, Say Something’ campaign.

Among other things, this partnership is “expected to enable teachers complement efforts of the Ministry to protect Ghana’s borders” and promote peace in communities across the country.

The meeting which took place on Thursday, May 26, saw the attendance of GNAT officials from all levels and sought to “enable them inform members on why it is important for the country’s security to be safeguarded.”

According to the National Security Coordinator, Major General Francis Adu-Amanfo (Rtd), teachers are critical agents of development as they can help prevent the threats by education the public, especially students.

Hence, it is important that “teachers in all communities become alert and aware of their surroundings and pick-up signals” that would complement efforts to enhance security.

He, therefore, charged leadership of GNAT to educate their members on sensitive information and signals needed to assist National Security in maintaining peace internally and across Ghana’s borders.

On his part, President of the Association, Isaac Owusu, encouraged teachers to “assist security agencies in addressing conflicts” in their efforts to maintain the peace.

Out of the 346 terrorist attacks recorded in some African countries within the first quarter of 2022, 49% of them have occurred in the West Africa sub-Region.

As recently as May 11, 2022, about 15 assailants and eight military personnel were killed during a terrorist attack in Togo.

Owing to these threats, the National Security Ministry has launched a citizen awareness campaign dubbed ‘See Something, Say Something’ to encourage people to report suspicious acts of terrorism.

The aim of this campaign, among other things, is to get citizens highly alert and report suspicious characters in the wake of terrorism threats suspected by security analysts.

It forms part of the operational strategy in collaborating efforts between security agencies and the citizens to safeguard the borders of the country.