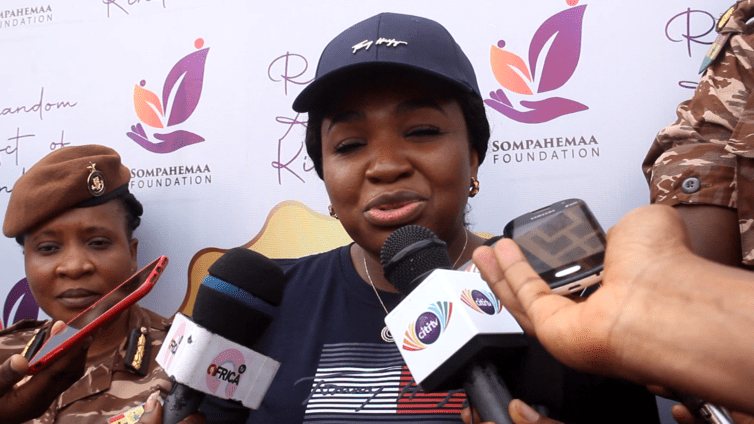 Founder and President of the Foundation, Irene Kyei-Mensah Bonsu

Hundreds of inmates at the Kumasi Central Prison have benefited from a health screening organised by the Sompahemaa Foundation.

The exercise was to diagnose inmates of some ailments and provide medical treatment.

Many inmates in the prisons suffer from skin problems and other heat-related diseases due to congestion at the facility.

The outreach is part of the Sompahemaa Foundation’s annual support to vulnerable people in society.

Over the past four years, the Foundation has positively impacted the lives of poor people in society.

Founder and President of the Foundation, Irene Kyei-Mensah Bonsu says inmates must be supported because of the bad situation they are in.

She is concerned about the current state of the prison clinic and says more needs to be done to support philanthropic organisations.

Mrs Kyei-Mensah Bonsu appeals to individuals and organizations to come aboard to help alleviate the pain of inmates, as they are entitled to a better life.

Deputy Commander at the Kumasi Central Prison, ADP Ousamane Tasembedo, commended the Foundation as the exercise will help to address some of the inmates’ health problems.

He noted the outreach is in conformity with the Prison’s health regulation which mandates the screening of all inmates at least once in a year.

Currently, nearly two thousand inmates are at the Kumasi Central Prisons, though the facility was meant for seven hundred inmates.

ADP Tasembedo indicates malaria, hernia, and blindness are among diseases commonly recorded in the prison.

He also calls on the government to increase the feeding fee of GHS1.80 as the cost of food prices increases.

Meanwhile, Mrs. Irene Kyei-Mensah Bonsu has refuted claims her Foundation’s operations are geared towards preparing her to run for the Suame parliamentary seat when her husband Osei Kyei-Mensah Bonsu leaves Parliament.

She urged the public to disregard such rumour intended to discredit her philanthropic works and tarnish her image.