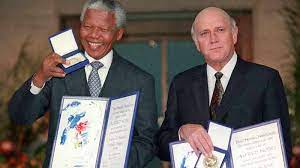 The Nobel Peace Prize medal of South Africa’s former President FW de Klerk was stolen from his home in April, his foundation has confirmed to the BBC.

It did not give further details, but local media reported it was taken during a robbery at his Cape Town home.

Mr De Klerk won the prize alongside Nelson Mandela in 1993 for their efforts to end the apartheid system.

South African media reported police have not made any arrests or recovered the medal.

“I realised that we were robbed in April of this year. On 5 April, I went to the safe and the safe was open. I had returned from an overseas trip on the fourth, so I remember the dates. Unfortunately, the safe was nearly empty,” she said.

“A lot of my jewellery was taken – it is difficult to put a price to it, as the pieces that were taken were given to me over the last 50 years for occasions, plus I had pieces that I inherited from my mother,” she added.

She said she was not hopeful that the stolen items would be recovered.

Alongside Mr Mandela, South Africa’s first black president, Mr De Klerk, who died in 2021, was awarded the prize along with the 18-carat gold medal in 1993.

Mr De Klerk became president in 1989 but handed power to Mr Mandela five years later, marking the end of white-minority rule in South Africa and the beginning of the democratic era.

He died almost exactly a year ago at the age of 85 after having been diagnosed with mesothelioma – a cancer that affects the lining of the lungs.

DISCLAIMER: The Views, Comments, Opinions, Contributions and Statements made by Readers and Contributors on this platform do not necessarily represent the views or policy of Multimedia Group Limited.
Tags:
FW de Klerk
Nobel Peace Prize