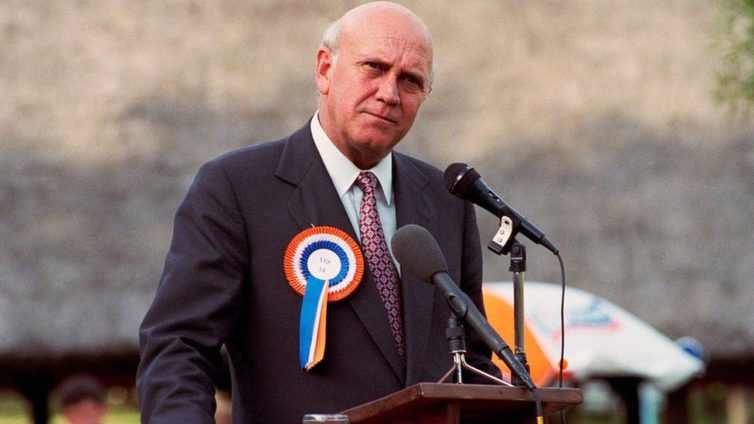 For some in South Africa, FW de Klerk was a great statesman – the Nobel Peace Prize winner who helped end the system of legalised racism that he inherited.

For others, he benefited enormously from that same system and deserved to be prosecuted for its many crimes.

In truth, he was a man of many parts.

The 85-year-old was South Africa’s last apartheid president. During his time in office, security forces meted out extreme violence against black South Africans who simply wanted an end to rule by the country’s white minority – fighting for the release of Nelson Mandela and other leaders from prison.

Apartheid was not that long ago and it remains extremely raw in South Africa, not least because no-one has been criminally prosecuted for the violence of the time. Crimes were committed – its victims traceable – but there were no criminals, it seems.

Some people believe De Klerk could and should have done more to change that – to ensure accountability for what the apartheid system did to the lives of black people and the violence of his government, and even that he should have faced justice as well.

He was, after all, on the inside for many decades – he had a front-row seat on the apartheid machinery at work and had benefited from it for many years.

A trained lawyer, who served as a National Party MP since 1972, De Klerk had a firm understanding of the party which created apartheid, and found a way of working within its structures to rise to the top, although he was undoubtedly more moderate in his views than his predecessors.

It is perhaps this that made it possible for him to carefully steer even the most visceral defenders of the apartheid system within his party to the negotiation table where Mandela was offering a chance to help rebuild the country – a negotiated way out of what many believed would have been a bloodbath.

The Archbishop Desmond Tutu Foundation acknowledged his contribution to the democratic transition:

“The late FW De Klerk played an important role in South Africa’s history. At a time when not all of his colleagues saw the future trajectory of the country unfolding in the same way, he recognised the moment for change and demonstrated the will to act on it.”

The custodians of the legacy of Nelson Mandela, with whom De Klerk shared the Nobel Peace Prize, pointedly described him as someone with a “big” legacy but also one that was “uneven”.

De Klerk chose to negotiate with the African National Congress (ANC) at a time when many countries around the world and former allies had turned their back on the National Party and their government was all but bankrupt. Sceptics say he was more of a pragmatist than an idealist – that he had little choice.

In his book, Long Walk to Freedom, Mandela was pretty clear: “Despite his seemingly progressive actions, Mr de Klerk was by no means the great emancipator.

“He did not make any of his reforms with the intention of putting himself out of power. He made them for precisely the opposite reason: to ensure power for the Afrikaner in a new dispensation.”

However, this decision alienated him from many in his party and years later some in his Afrikaner community still saw De Klerk as a traitor.

A few years ago I visited the whites-only town of Orania – home to people disenchanted with the “rainbow nation” dream, choosing instead to live in isolation.

There on a hill, in the small town where a flag inspired by the old apartheid standard continued to fly and bronze statues of past leaders of the apartheid government were proudly displayed, De Klerk was missing – erased from their list of “heroes”.

The people I spoke to saw him as a coward, and believed he had sold them out.

Even to the end, De Klerk seemed to be unsettled with his own place in South Africa as he battled illness.

In the video message released by his foundation soon after his death, a frail-looking De Klerk said that, while he had once supported the “separate development” project as he called apartheid, in the 1980s he had “changed completely”.

He described this change of heart as a conversion and said this is why he agreed to negotiate with Mandela and other political leaders.

He added that in the years since the end of the oppressive regime he had done what he could to continue to denounce it, even amidst scepticism.

“Let me today in this last message repeat: I, without qualification, apologise for the pain and the hurt and the indignity and the damage that apartheid has done to black, brown and Indians in South Africa,” De Klerk said in a video dubbed his “final message”.

For the majority of South Africans, the legacy of apartheid has led to millions of people living in poverty and persistent inequality.

Some here believe redress has not happened largely because there is no shared acknowledgment that apartheid has continued to go unpunished – De Klerk’s passing leaves uneasy questions about how to reckon with this.

“De Klerk sat in on the meeting of the State Security Council where they had discussed the fate of Matthew Goniwe and Fort Calata in 1984 and 1985,” said Lukhanyo Calata of the Fort Calata Foundation.

His father, Fort Calata, was an anti-apartheid activist, and was murdered alongside Matthew Goniwe and two other men by apartheid police in 1985 – the so-called Cradock Four.

He’s been working for years get them justice and in June this year approached the courts to help prosecute the apartheid-era murders. A ruling is still pending.

“It is sad that yet another apartheid criminal has died without having accounted for the crimes he helped to perpetrate against our humanity” said Mr Calata.