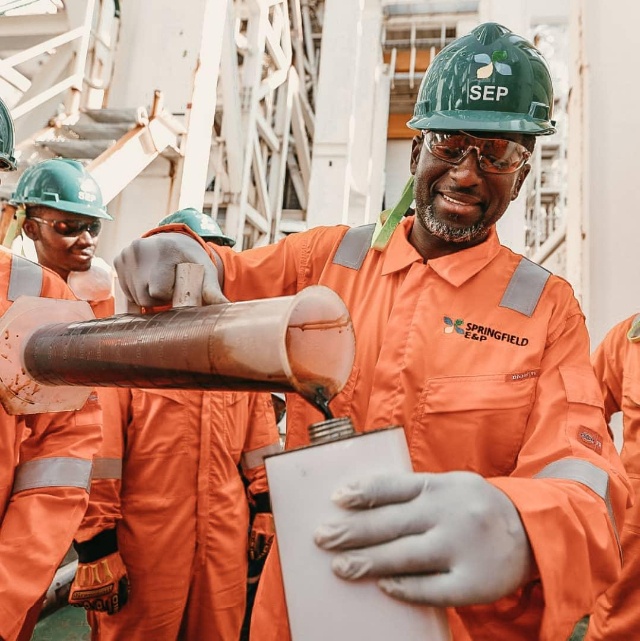 Founder and CEO of Springfield Group Kevin Okyere has denied reports the oil company has cooked up figures to shore up volume numbers of its recently discovered find in offshore Ghana.

The Springfield Group announced in December 2019 it had made a significant oil discovery in the West Cape Three Points Block 2, offshore Ghana in excess and more than doubled its already discovered oil of 1.5 billion barrels.

This is the first foray of a fully Ghanaian-owned into deepwater exploration.

some industry players have questioned the volumes since Springfield Group has failed to provide information on it appraisal drilling to validate their reported findings.

A Ghanaian entrepreneur and President of mPedigree Bright Simons, had this to say on Twitter after the announcement of the discovery.

“There was a time in my life, in the hotheaded phase of IMANI life, when I used to spend a lot of time “exposing” Tullow for I will strongly advise Springfield to be careful,” he warned.

Other experts who spoke to JoyBusiness on the condition of anonymity say the invalidated volumes reported may be a marketing gimmick to make the field very extractive to lure investors.

Reacting to these allegations, CEO and Founder of the Springfield Group Kevin

Okyere disagreed with these assertions.

He said a lot of hard work had gone into their operation leading to the discovery.

Mr Okyere added that “in 2017, we brought in a seismic vessel called Frankfort

Tightener into Ghana and we short seismic over our entire block. So based on the interpretation of our scientists, geophysics, and petroleum engineers, together with the Ghana national petroleum corporation, GNPC, led to the location that we drilled. So it was all about team effort and we drilled one well and hit 2 discoveries,” he explained.

He added that the company values its credibility hence won’t indulge in the manipulation of volume numbers especially since they work in a regulated industry.

“What people need to understand is that there was an existing discovery in our block when we were awarded and what we have done is to increase the proven volumes of discoveries to a little over 1.5 billion. There are gauges, there are laws so you can’t make up these numbers. The technical teams that worked with every one of these reputable companies working in Ghana assisted us in measuring our volumes. We have added an additional Gas of 700bcf, also our measuring tools and service companies are the same ones in use by EXXON, Tullow, and everyone else in the industry,” he said

On claims that it is not possible to gain such an amount of volume through drilling a single well, Kevin Okyere cited examples of other countries like Nigeria to buttress his point that this is achievable. “We work with integrity, we work with blue-chip companies and can’t cook figures.”

Senior Lecturer in the Department of Chemical and Petroleum Engineering,

KNUST, Kumasi, Dr Stephen Donyinah says there is a possibility of getting even more in a single well.

“It is possible to find one well with those volumes mentioned. The reservoir is a big area with deposits of oil and the well could hit an area within the reservoir that holds volumes of oil and therefore it is not surprising that the find was so huge,” he stated.

Despite this, a source and an industry expert who spoke on condition of anonymity has however expressed some doubts about the volumes discovered.

He said “The confusion about their figures is that they haven’t clearly stated to the media the volumes they discovered in the Afina-1X well. There are existing small and heavy oil discoveries already in the block made by Kosmos Energy before relinquishing the block which was later awarded to Springfield.”

He added that Springfield should have separated their discovery from the previous data from that of Kosmos exploration. “What they have attempted to do is to add what they already have to what they have discovered but that’s very tricky to interrogate unless you know specifically what they discovered in this well independently. Again Springfield is not a publicly listed company so there’s no strict guideline regulating how they report their volumes and it’s a shame GNPC and Petroleum Commission PC are not strict reporting regime on this implications.”

He, however, expressed fears, if this proves to be an overestimation investor will lose confidence in regulatory controls.

The Springfield Group is 100 per cent homegrown Ghanaian-owed with Springfield having 84 per cent stake and GNPC having 16 per cent in the company through its subsidiary – GNPC Explorco.

The company said it is poised to employing more locals to boost local content in Ghana’s oil and gas sector.

Currently, the company says 90 to 95 per cent of people on their exploration production field are Ghanaians.

“Mind you this is an industry that, the expertise that is needed cannot be compromised. So we are making efforts to ensure that all the expatriates on our filed train the locals. It will take time to achieve local content and we can’t compromise that,” Mr Okyere explained.

In the coming years, Springfield says it is poised to become a key player in Ghana’s oil and gas industry through value addition and history will confirm if its reported volumes are true or not.