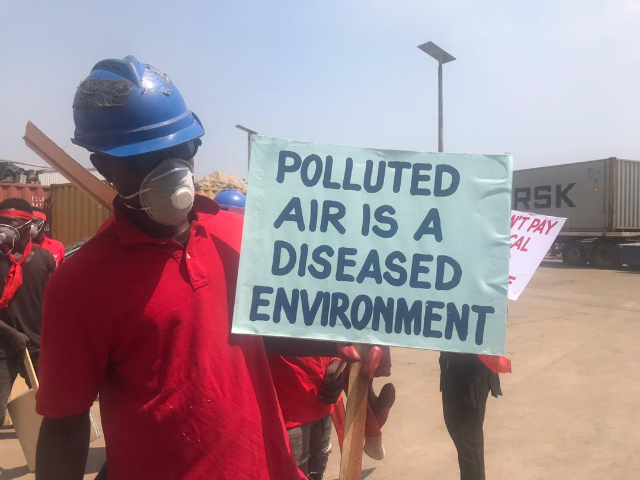 Some steel factory workers at the Free Zones Enclave at Tema on Monday embarked on a demonstration against smoke emissions in the area.

These workers, all clad in red, are calling on the government to fast track interventions to clamp down on two steel factories – Rider Steel and United Steel – flouting regulations of the Environmental Protection Agency (EPA) which insists that smoke chimneys be elevated to approved levels.

With placards reading; “Toxic emissions is unacceptable”, “People should be held responsible”, “We are dying slowly,” the factory workers complained their lives have been endangered by the emissions.

“We are dying, I have been to the hospital twice and the doctor is telling me not to work but there is nothing for me to do. We have lost two of our colleagues and we are scared,” he revealed.

The demonstration follows investigations by Joy Business on how smoke emissions by some steel factories at the Free Zones enclave is not just destroying the environment but also putting the lives of factory workers at risk.

Upon visiting some steel factories at the Free Zones Enclave in Tema, one is met with plumes of smoke. The thick smoke darkens the environment making it hard to see or breathe.

The smoke emissions have caused the shutdown of one steel factory. Felix is a supervisor at MnD Metals, another factory at the receiving end of the emissions. According to him, “the company has sent so many letters to the Environmental Protection Agency (EPA) and yet we are not getting any results,” he revealed.

Earlier, the Environment Protection Agency (EPA) ordered these steel factories – United Steel and Rider Steel – to shut down for not complying with Ghana’s environment safety regulations.

This order followed investigations by JoyBusiness Charles Ayitey on how smoke emissions by some steel factories at the Free Zones enclave are not just polluting the atmosphere but also endangering the lives of factory workers.

Deputy Executive Director of the EPA, Ebenezer K. Appah-Sampong told JoyBusiness a task force has been deployed to the site to ensure both steel factories have indeed shut down.

“As per the procedures when you have such noncompliance issues you engage them after your investigations and then agree on a certain roadmap to ensure that it is fixed permanently, our records indicate that we have exhausted that process and we are not waiting anymore we wrote to the two companies on the first of July to shut down operations and then fix the problem before we can allow them to work,” he said.

Ghana is ranked 124 in the 2018 Environmental Performance Index (EPI) which ranks 180 countries on environmental health and ecosystem vitality. What this means is that the country has performed poorly when it comes to being environmentally safe and for these steel factory workers, now is the time for authorities to act now.

DISCLAIMER: The Views, Comments, Opinions, Contributions and Statements made by Readers and Contributors on this platform do not necessarily represent the views or policy of Multimedia Group Limited.
Tags:
Steel factory
United Steel