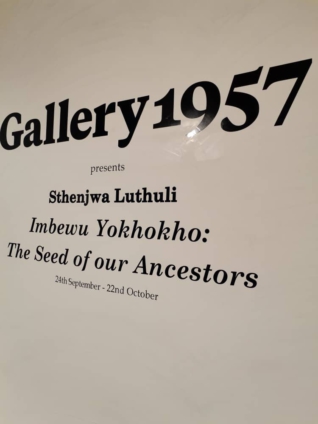 In his first solo exhibition in Accra, Ghana, dubbed Imbewu Yokhokho (The seed of our ancestors), South African artist, Sthenjwa Luthuli displays his masterfully carved and painted wooden reliefs and woodcut prints at the Gallery 1957.

The exhibition, which is a celebration of time, freedom, his Zulu ancestry and spirituality, was opened to a large crowd of mostly young people who themselves exhibited the youthful exuberance of Luthuli’s artwork.

Exhibiting about ten pieces in total, Luthuli’s work displayed headless figures suspended in a dance-like dream-like state against a heavily patterned background that often looks like a kaleidoscopic dreamscape.

Whereas one may often feel a sense of freedom and energy from some of his paintings, to others it appears they are restrained, bound by twines to the board upon which they float.

This is reminiscent of the social inequality and the many restrictions that racialised groups in his home country experience, in the form of a lack of opportunities and access to proper social infrastructure, further limiting their abilities and keeping them somewhat subjugated.

Thus those not bound by the twines are those that have broken free to dance, to thrive and survive in the unequal society.

His brilliant use of bold colours that shimmer and shift under the light creating a feeling that is as ethereal as his woodprints evokes strong emotions as well as sublime beauty.

While his work critically analyses the ever-shifting social landscape of his home country, it also embodies his Zulu heritage and spiritual self while referencing the ongoing struggles that face racialized groups in post-apartheid South Africa.

Luthuli is a socially-conscious artist whose works have been exhibited in Cape Town, Johannesburg, London, Lagos, and beyond.

Collectors of his work include musicians Alicia Keys and Kasseem “Swizz Beatz” Dean.

He has cited fellow countrymen Ephraim Ngatane and Gerard Sekoto as influences, as well as Wangechi Mutu, Yinka Shonibare CBE, and Edward Hopper.

His exhibition at Gallery 1957 at Kempinski Gold Coast Hotel will last till October 20, 2022. Admission is free.

DISCLAIMER: The Views, Comments, Opinions, Contributions and Statements made by Readers and Contributors on this platform do not necessarily represent the views or policy of Multimedia Group Limited.
Tags:
Gallery 1957
Imbewu Yokhokho
Sthenjwa Luthuli