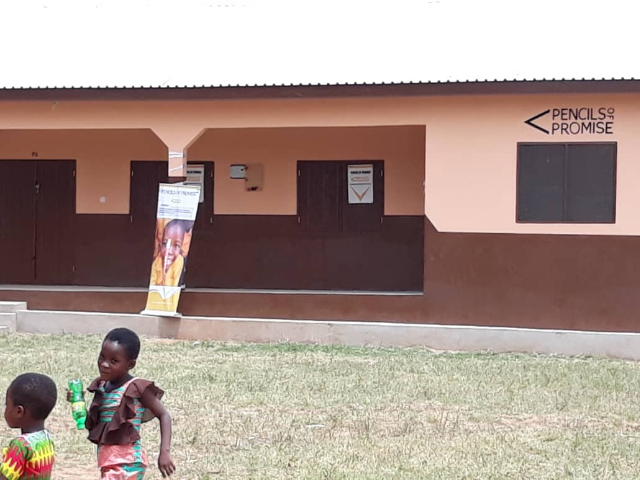 The MCE for Ketu South Elliot Edem Agbenorwu has given a strong warning to teachers who engage school children in household chores especially on the farms during school hours to desist from the act immediately or face the law. According to him, he has had reports of how teachers send school children to their farms as well as fetching of water.

Mr Agbenorwu gave the warning during the commissioning of the classroom blocks by the Ketu south assembly and the Pencils of Promise at Amedzikope in the Ketu South Municipality.

According to the Elliot Edem Agbenorwu, the practice has become a habit for the teachers, who instead of teaching, engage school children with political discussion. It is a situation, which is worrying to the Assembly and the Education Directorate.

He has however advised parents to keep an eye on their children and to those teachers engaged in the act to stop immediately.

“If you want to do politics, leave the classroom and join me do the politics,” he warned.

Amedzikope is one of deprived communities that lacks many basic amenities like good schools, water etc. The school infrastructure of these schools is in a bad and deplorable state, which has become a worry to residents.

Pencils of Promise in collaboration of the Ketu South Municipal Assembly, have finally built classroom blocks for the Amedzikope Basic School to enhance teaching and learning in the community. The headmaster of the school Ben Dzima lamented on how bad the situation was until the MCE for Ketu South Elliot Eden Agbenorwu, in partnership with the Pencils of Promise came to the aid of the school.

According to the headmaster, it needs the commitment of the community and stakeholders to help improve upon the standard of education in the communities. The Country Director of Pencils of Promise Freeman Gobbah, has assured that more projects are under construction for several communities in the Volta Region.

According to Mr Gobbah, the aim of Pencils of Promise is to make sure those communities in the country that lacks infrastructure is built with modern appliances with auxiliary facilities. He said so far, 150 projects have so far been commissioned in the Volta Region by the organisation with many more currently under construction.

He appealed to the stakeholders to give a helping hand to help the assembly, with development works of the various communities.

DISCLAIMER: The Views, Comments, Opinions, Contributions and Statements made by Readers and Contributors on this platform do not necessarily represent the views or policy of Multimedia Group Limited.
Tags:
Ketu South
Mr. Elliot Edem Agbenorwu