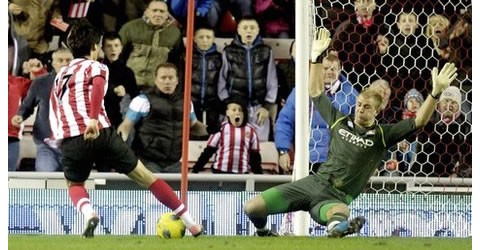 City were aiming to capitalise on Manchester United’s loss to Blackburn, but came up against a determined display by Martin O’Neill’s side.

Nicklas Bendtner and Stephane Sessegnon were denied a goal either side of the break, with Edin Dzeko and Micah Richards both hitting the woodwork.

But with the last kick of the game, Ji rounded Joe Hart to win it.

It was a breathless end to a pulsating second half when, following an isolated counter-attack, the Korean substitute latched onto Sessegnon’s through ball, despite a suggestion of offside, before coolly finishing.

And it was a rich reward for a performance which would leave defensive coaches drooling such was Sunderland’s energy all over the pitch and their steel at the back.

The result earns O’Neill his third win in five league matches since taking over at the Stadium of Light and lifts them to 13th in the table, six points above the relegation zone.

While for City, it means that they stay top ahead of Manchester United on goal difference but they have now failed to score in their last two games and have not won away in their last four league outings.

Despite laying siege to the Sunderland goal late on, manager Roberto Mancini will recognise the missed opportunity and will perhaps rue his decision to rest Sergio Aguero and David Silva before introducing them after the break.

And there will be no-one more grateful than Manchester United boss Sir Alex Ferguson, who is a good friend of O’Neill’s.

With both teams in action on Boxing Day, and facing further matches in 48 hours’ time, the pace of the game began slowly compared to the second period.

But Sunderland almost took the lead in the opening three minutes when, from a Manchester City corner, Sessegnon sent Bendtner clear but a poor second touch allowed Hart to force him wide and smother his shot.

Northern Irishman James McClean was making his full debut for the hosts and tested Hart again soon after, yet once City withstood that spell they began to wrangle possession from their opponents.

Adam Johnson, provided a test for Sunderland’s stand-in full-backs Jack Colback and Craig Gardner on either wing as he switched positions and fired over from a short corner.

But the Sunderland pair, along with others including skipper Lee Cattermole, typified a display which was full of courage and concentration.

Mancini started Edin Dzeko as a lone striker and the Bosnian was isolated at times, although he came closest when he clipped the bar following a corner.

At the other end Gardner fired over with an angled effort after clearing Samir Nasri’s goalbound shot, and City’s lack of goal threat prompted Mancini to introduce Aguero at the break and Silva soon afterwards.

With the game becoming more open, Mignolet saved from the Argentine forward, although it appeared Sessegnon was fouled in the build-up to the close-range strike.

And as Sunderland continued their quick pressing, they were inches from scoring after the hour mark when Sessegnon picked up Bendtner’s flick-on and skipped past Vincent Kompany, but his shot with the outside of the boot fizzed just wide.

That opening led to sustained period of pressure on the Sunderland goal yet the Black Cats remained firm despite Silva testing Mignolet twice and Richards heading the ball into the ground and onto the bar late on.

Dzeko was also off target on several occasions, and his and City’s profligacy was made to pay when urged by the rapturous home support, Sunderland broke forward and Ji proved the calmest person in the stadium by sealing the victory with a superb finish.