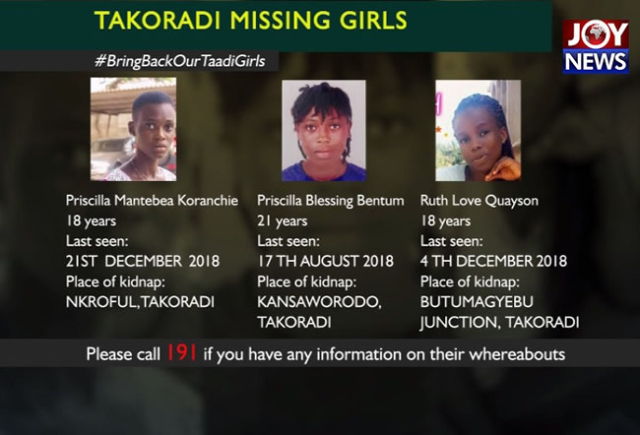 The Minority in Parliament say they will cause the Inspector General of Police to appear before the House, to answer questions on the kidnapping of some three girls in Takoradi.

Minority Leader, Haruna Iddrisu, said when the House resumes from recess, he will file a motion to effect same.

“The matter of the kidnapped girls is a matter of national importance and next time we come, we will file a motion to compel the Inspector General of Police through the Ministry for the Interior, to report to this house what steps have been taken to secure these children,” the Tamale South MP said.

The legislator said they want answers different from the rhetoric that has dominated press conferences by the police.

When were the girls abducted?

The first of the three, Priscilla Bentum was abducted in August 2018. Since then two others have gone missing; Mantebea Koranchie and Ruth Love Quayson in December same year.

Samuel Wilson Udoterg, a Nigerian has been linked to the disappearances.

The suspect has, however, not been charged for the offence. He was arrested but escaped.

Udoterg is the prime suspect in the kidnappings

After his rearrest, he has been tried and sentenced to 18 months for jailbreak without any convincing progress on the kidnap accusation against him.

The Western Region Police initially told Joy FM the suspect was leading them to wrong locations he purported to be the location of the girls.

What have the police been saying?

The Police CID has said at a press conference that they “know where the girls are.”

The families of the girls have, however, called into question the integrity of the police. “I don’t believe it”, a sister of Ruth Love Quayson told Joy News.