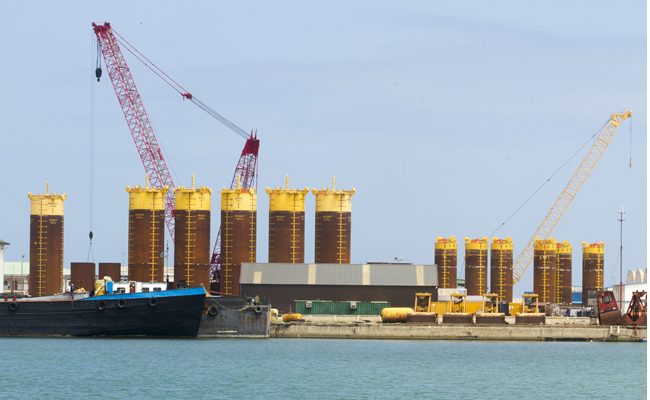 The face of Takoradi Port as the preferred hub for Oil & Gas services in the entire West African sub region has been given a major boost as Subsea 7 has started the load out equipment and structures for Tullow’s TEN project.

Subsea 7 and indigenous Belmet Ghana, have been working together in Subsea 7’s fabrication facility in Takoradi Port to produce 2,000 tons of fabricated subsea structures including 25 suction piles, a manifold, and other structures.

These subsea structures were fabricated by Ghanaian welders and fabricators for the TEN project. This is the first time such structures and highly technical equipment have been fabricated and assembled in Ghana by Ghanaians. The manifold, suction pipes and other structures would be installed into the seabed for the oil and gas production to begin.

Capt. James Owusu Koranteng, Director of Port at the Takoradi Port, told Joy news the load out will be supported from the Port of Takoradi, with 18 vessels including tug boats and barges delivering thousands of tons of equipment and materials. He said the Subsea 7 vessel, Simar Esperanca, will set the acoustic transponder array that will enable all construction vessels to position with high accuracy for structure installation and pipelay applications.

The Subsea 7 vessel Simar Esperanca will set the acoustic transponder array that will enable all vessels to position with high accuracy for structure installation and pipe-lay applications.

Operating in seawater depths of 1,000 to 2,000, the Simar Esperanca will install small structures, pre-commission flowlines after installation by pipe-lay vessels, perform pre-lay and post installation survey, and complete the measurements for connections between flowlines, manifolds and wells.

Subsea 7 will bring to the Takoradi Port the world’s most powerful pipelay and heavy lift vessel, the Seven Borealis to lay thermally efficient pipe-in-pipe flowlines, install suction foundation piles for manifolds, and install the manifolds.

The Seven Borealis is Subsea Seven’s state – of – the – art strategic enabler, ideally suited to meeting the exact requirements of today’s ultra deep and deepwater projects in the world’s deepest and harshest environments

Besides the load-out of subsea equipment fabricated by Belmet, Subsea7 will do all its crew changes in Takoradi Port. Twice a week a Bourbon fast surfer vessel will run between the Port and Subsea7's offshore vessels to exchange crew. Once arrived at the Port, the crew will go through a transit waiting room for safety briefings and immigration or customs formalities before either taken offshore or to Takoradi's Air Force Base to be flown by chartered flight for international connections.

Meanwhile, Takoradi Port is providing support to ENI's Offshore Cape Three Point (OCPT) by offering berthing, drill water, waste management and pipelay yard facilities. The support to OCPT project is expected to last between three to four years which is a substantial source of revenue for GPHA Takoradi.

Recently, most of Takoradi Port's berths have been occupied by Oil & Gas supply vessels. The Port has been buzzing with lowbed trucks and cranes delivering subsea fabricated good, equipment and supplies for the ENI's offshore operations.

This is a far cry from what happened a year ago where Takoradi Port was not fully ready and equipped to support Ghana's emerging Oil & Gas markets. GPHA Takoradi has put in much work and effort over the past year by setting up a very effective Oil & Gas Department with related services to give priority to Ghana growing Oil & Gas clients.

The Port has seen the setting up of a fabrication yard of international standards by Subsea7 and Belmet, General Electric Oil & Gas and JVC Ltd secured space to respectively supply Christmas trees and modules for ENI's OCPT project.

Many Oil & Gas majors and companies are in the process of finalizing long term leases with Takoradi Port's Oilfields Service Hub.