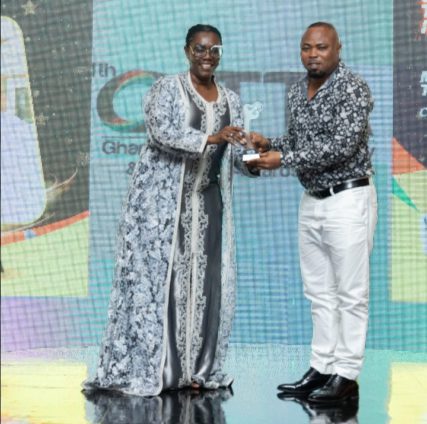 The CEO of Mobile Zone, the sole distributor of Tecno phones in Ghana, Maxwell Techie, was honoured at this year’s Ghana Information Technology and Telecom Awards (GITTA) for his ‘Outstanding Contribution to the Mobile Phone Industry’.

Additionally, Tecno was adjudged the Smartphone Brand of the Year and Mobile Zone walked away with the Phone Distributor of the Year award.

For Tecno and Mobile Zone, they have always won the same awards since the inception of the GITTAs in 2013. But for Maxwell Techie, this is the first time he has been honoured for his massive contribution to the mobile phone industry in Ghana and Africa, and this award is long overdue.

The man, who is fondly described by his industry colleagues as “the father of the mobile phone industry in Ghana”, is the first to win this prestigious award for his many years of driving smartphone penetration growth in Ghana by dint of hard work and consistency.

Maxwell Techie took the risk and blazed the trail with affordable Chinese phones when many Ghanaians were used to Nokia, Samsung, Motorola, Ericsson, LG and Blackberry phones. People had no interest in Chinese phones because they were seen as cheap, with no swag and of low quality.

The Tecno CEO and his colleagues in the mobile phone industry, at the time, used to import and sell refurbished phones from Hong Kong and the UK because Ghanaians could not afford brand new phones.

But Maxwell Techie stepped out of the crowd and went into a relationship with the Chinese manufacturers of Tecno phone, Transsion Technology, to develop a tailor-made brand for the Ghanaian and African market.

“My relationship with Transsion Technology goes beyond being just a distributor of Tecno – I was there from day one when Tecno was born, and I made significant input into the making of Tecno – I told them what features Ghanaians and Africans love, and they included it in developing the brand.

“People do not understand why Tecno became very attractive to Ghanaians and Africans quickly – but this is the secret – I made an input into its development. I suggested the inclusion of many features based on my market research on Ghana,” Maxwell Techie recalled.

According to him, when he started bringing Tecno to Ghana, many of the key retailers and sub-distributors were not interested because it was a complete China-made phone, unlike the refurbished Samsung, Nokia, Ericsson, Motorola and others that they all used to sell.

“I, therefore, started distribution from my car booth. I would spend a lot of money and advertise in the Daily Graphic in particular – people would see the advert and call me, and then I will drive and go and deliver,” he said.

Over time, the Mobile Zone boss took his marketing strategy to the next level by signing on as a sponsor of the EPL (English Premier League) on VISAT1 as the prime mobile phone brand to sponsor football on TV. He also sponsored Peace FM’s sports show for many years at the time, and that paid off massively.

People saw and heard of the Tecno in the adverts, and they started rushing to the regular mobile phone shops to look for the phone, but they could not find it because the retailers had refused to stock Tecno. But that began to change quickly because the shops now started rushing to Maxwell Techie to get Tecno phones as the demand grew.

Within a short time, all phone retailers in the country were in big business selling Tecno phones because the demand had become very high. To date, the love for the brand has been sustained, and it is driving mobile phone penetration growth in the country, all by the commitment of one man, Maxwell Techie.