The Diaries of an Oguaa Fisherman: The Judas in the Ghanaian - MyJoyOnline.com

The Diaries of an Oguaa Fisherman: The Judas in the Ghanaian 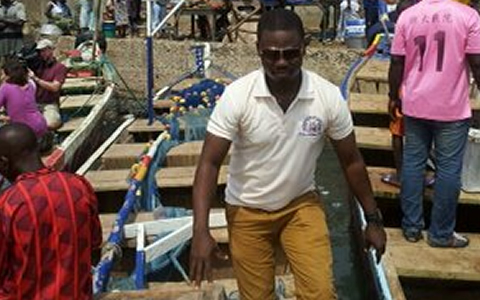 A few months ago, after traversing the bellies of the sea for a whole night, my wife and I sat down to watch a movie.

It was such a dramatic piece that was punctuated with a lot of bleakness, a lot of pain—we did not know where it was heading, but it did not appear to be toward happiness.

Still the story lingered on and intrigued us because we were right in the middle of the plot, and it is human nature to want some resolution. Then the DVD started frisking and skipping.

I buffed it with my handkerchief, first; the  tip of my  tee-shirt, second; sprayed some Windex on it, and even blew into the DVD player like it was an old Nintendo cartridge but it was all to no avail. The DVD still skipped, and we were left without an ending.

What I went through at the video-watching-moment is akin to the season of Easter that is actuated with a steady dose of drama. We always have the benefit of knowing how the story of Easter ends: conspiracy, intrigue, betrayal and the scattering of Christ's friends closely followed by his torture, passion and then death upon the Cross; but what we immediately forget is that we are the Judases of our time. Our betrayal and disloyalty have brought the nation this far.

Every year when the season of Easter is celebrated, we become so focused on the suffering and the death of Christ that we are like people watching a movie that just stops, and we do not know the rest of the story.

We accuse Judas of being a thief and that he was in charge of the group's money bag and sometimes stole from it. The numerous accusations we level against Judas is like the proverb of the mouse who went swimming with his friend, the lizard, and died from cold, for while the lizard's scales kept him dry the rat's hairy body remained wet.

This proverb by Chinua Achebe describes the reaction of the Umuofia Progressive Union after Obi Okonkwo had been charged and apprehended for bribery. Achebe tells us about our own complicity in this culture of corruption that is destroying our country.

The truth was that the members of the Umuofia Progressive Union were not concerned about the fact that Obi accepted bribes. Rather, their grouse was that he accepted bribes without covering up his tracks. This, up until today, half a century after those words were set in stone, is the root of our disease of corruption in the country today.

As soon as the word ‘corruption' is mentioned in any discourse in the country, like the accusers of Judas, our attention shifts quickly to the politicians who have been stealing monies meant for the development of the nation. Yes! It is true, and there is a sea of evidence that is known even to the foetus in the womb of a pregnant woman.

But while we stand on rooftops to shout and demand accountable from these politicians, we can begin to right the wrongs that we perpetuate daily against the nation and humanity as well.

The accusations we level against Judas is the same way we accuse people in authority when we are more culpable than those we accuse. Ghana is bleeding – a fact weightier than a truckload of elephants being transported to the zoo.

The nation is on its knees begging for intervention in all facets of leadership. A basic element of this misfortune is the seminal absence of intellectual rigour in our political thought – a tendency to pious materialistic obscurity and self-centered pedestrianism.

Yes! Judas was disloyal. He betrayed Jesus Christ. Even though Judas showed remorse later, his name became a symbol for traitors and turncoats throughout history.

We are like Judas, we betray Jesus for other kinds of compensation than 30 pieces of silver – the reward given to Judas when he betrayed Jesus. The married man who betrays his wife, or a wife her husband, betrays Christ.

The minister of God who is unfaithful to his state in life, or instead of feeding the sheep entrusted to him feeds himself, betrays Jesus.

Whoever betrays their conscience betrays Jesus. My fellow fishermen who divert and smuggle Premix fuel meant for the entire fishing community, betray Christ just like Judas did to Christ.

As a nation, an outward show of loyalty to Jesus, the lip service to follow him and the symbolic act of going to church is meaningless unless we also follow Christ in our hearts.

By following Christ in truth, we can minimize the level of corruption that has become ‘an entrenched clause'.

This writer, Richard Kwadwo Nyarko, is a multimedia journalist. His e-mail is quajo2009@gmail.com