The dos and don'ts of political photo-ops - MyJoyOnline.com

The dos and don’ts of political photo-ops 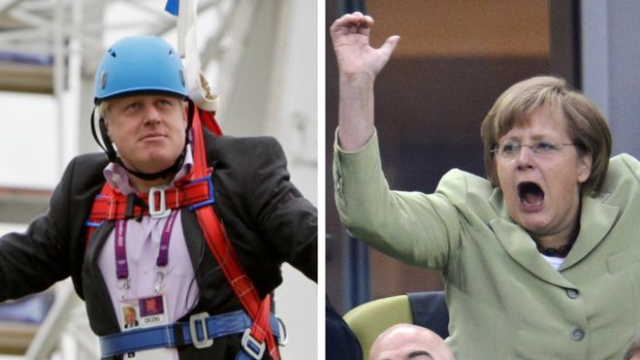 It’s fair to say that posing for pictures comes with the territory of being a world leader.

The political photo-op is now something of a cliché, but one set of images caught the attention of social media earlier this week.

Pictures of North Korean leader Kim Jong-un on horseback spawned memes and parodies. But they also got us thinking – what makes for a good photo-op?

So, we’ve dug into the archives and put together this short guide. Aspiring politicians: take heed.

Do: Think carefully about the setting 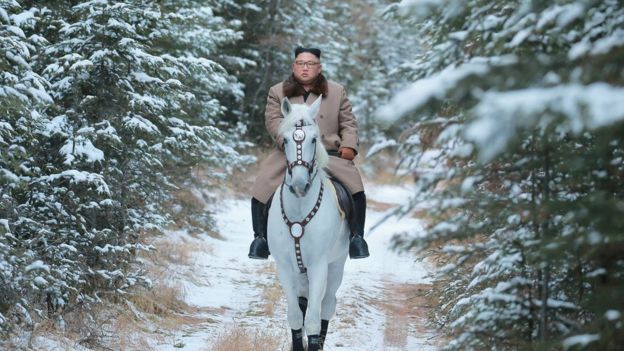 A number of striking – and frankly poetic – images of Mr Kim on a chilly-looking Mount Paektu were released by state media earlier this week.

That the setting of a photo-op really matters.

North Korea insists that Mt Paektu was the birthplace of Mr Kim’s father and predecessor. In this sense, analysts view these images as a not-so-subtle reminder of Mr Kim’s authority and power.

“These pictures are designed solely for domestic consumption,” says long-time North Korea watcher Professor Hazel Smith. “They mimic pictures of his grandfather on a white horse and are meant to help provide legitimacy and authority to his rule.” 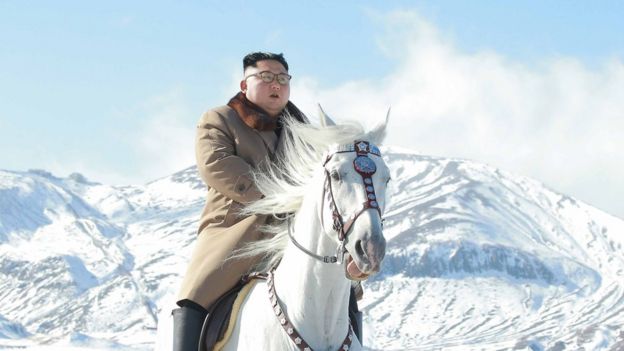 But, experts say, they are fundamentally designed to emphasise Mr Kim’s superiority.

“They give people the image that [he] is very different,” says North Korea expert Dr Sojin Lim. “That he is not an ordinary human being – more like a God.” 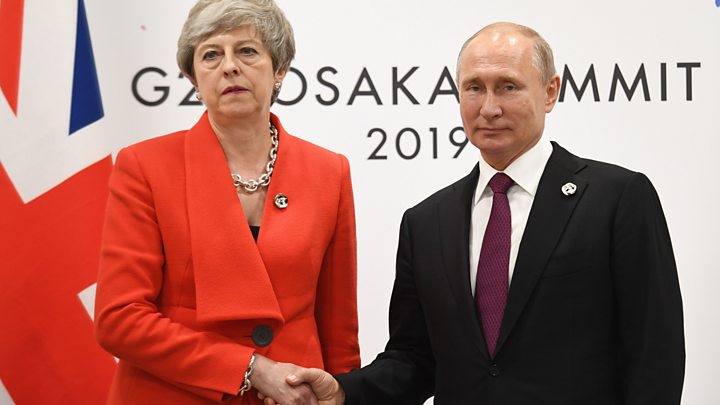 That body language, especially facial expressions, are key to a good photo-op.

And don’t assume that the visible tension here is some kind of mistake. That can send a clear message too.

This particular meeting was the first between the two leaders since the poisoning of former Russian spy Sergei Skripal and his daughter Yulia in the UK. The UK blamed Russia, which denied any role in the attack.

So, tensions were high. It’s fair to say this image made that abundantly clear.

Do: Show off your interests 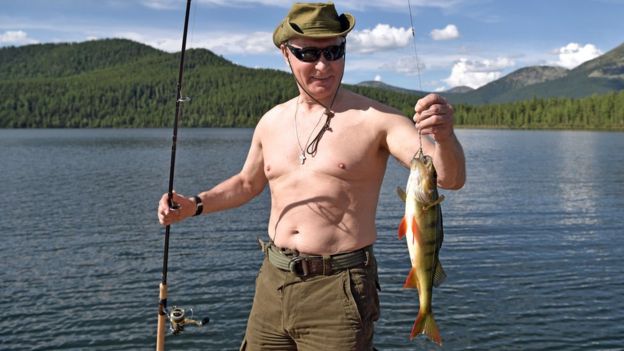 Mr Putin has become something of a photo-op legend, with images of him hunting, fishing, and exercising popping-up pretty regularly.

That photo-ops are all about projecting an image. And Mr Putin has a carefully managed one.

“They are an essential part of how he perpetuates his political image,” says Professor Kataryna Wolczuk, an expert in Russian politics. But why is he so often pictured doing outdoor activities?

“It’s all about masculinity,” Prof Wolczuk explains. “Russian men are expected to be strong, close to nature, and engaged in all sorts of daring pursuits. Putin uses these images to project himself as an action man.”

“There’s a cultural tradition here that power is for physically strong people,” she adds. 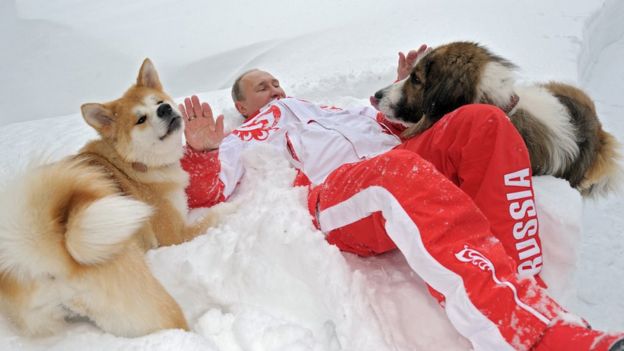 But it’s not all guns and wrestling. “Putin, and other leaders, also take care to show they have a softer side. He tries to appear well-rounded,” Prof Wolczuk says.

Hence the picture of him with the fluffy dogs. 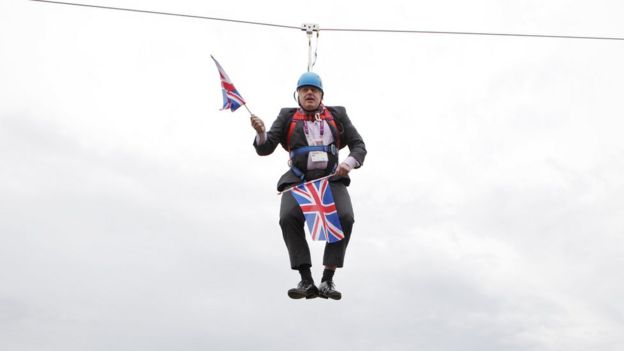 It happened in 2012 while he was still London mayor. It doesn’t look any less uncomfortable today.

That an apparent photo-op disaster can actually work out (relatively) well.

Almost immediately after Mr Johnson was pictured dangling from the wire, an array of memes and jokes about him spread online. 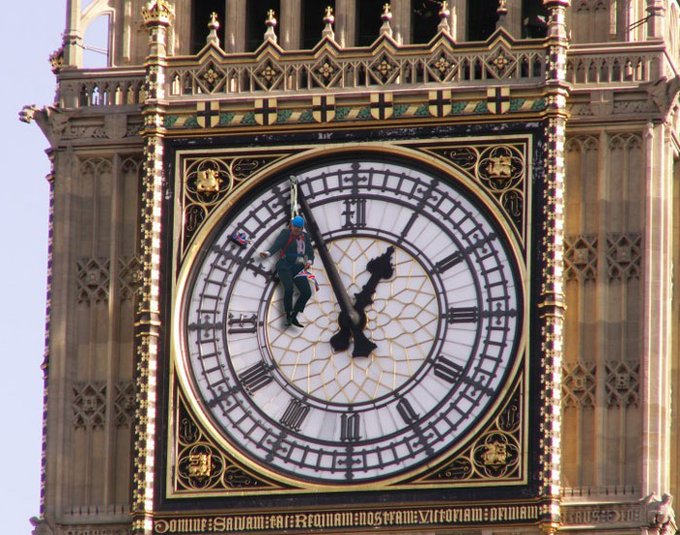 For most politicians this would spell disaster. But, as one witness told The Guardian earlier this year, “he seemed to take the buffoon and run with it”.

Do: Get pictured regularly 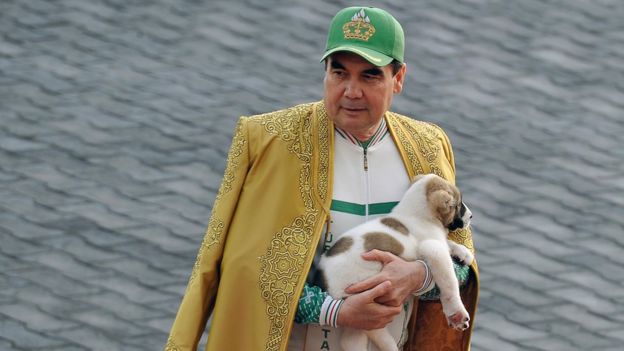 He’s known for his strongman image (despite the puppy) and for his ostentatious PR stunts. He also wrote a rap song about horses and a book about tea drinking. Don’t ask.

What can we learn from him?

That it’s important to have photo-ops, at least occasionally, if you’re a country’s leader.

Why? Well, because otherwise people might assume that you’ve died.

Rumours of Mr Berdymukhamedov’s death spread like wildfire earlier this year after he hadn’t been seen in public for weeks.

State TV broadcast footage of the president riding a horse, driving a rally car and shooting targets on holiday in an attempt to dispel the rumours. But there was no evidence any of it was recent.

It wasn’t until he was pictured at an event in a Caspian Sea resort town that rumours of his death were put to bed. Lesson learnt. 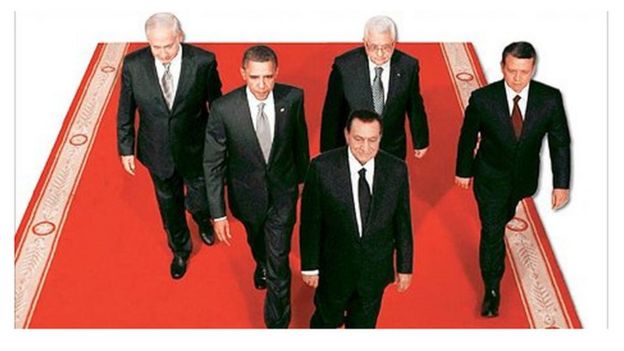 That grainy image (it’s from a newspaper) shows Egypt’s then-President Hosni Mubarak leading former US President Barack Obama and other world leaders along a red carpet in 2010.

It was taken at the White House shortly after Middle East peace talks were re-launched. Straightforward enough, right?

That when it comes to photo-ops things are not always as they seem. 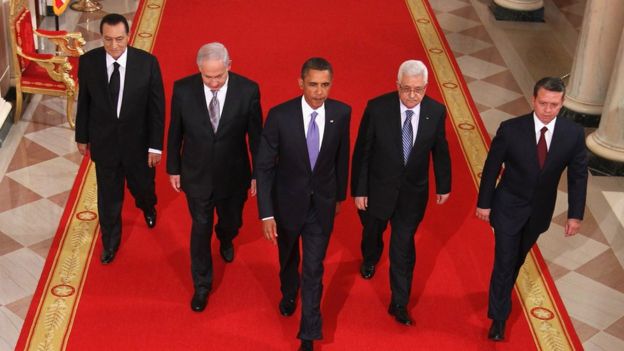 As you can see, in the actual image Mr Obama leads the way and Mr Mubarak trails behind.

To be fair to Mr Mubarak, it was Egypt’s state-run newspaper rather than his office that altered the image. But it still proved to be embarrassing.

Do: Consider the optics 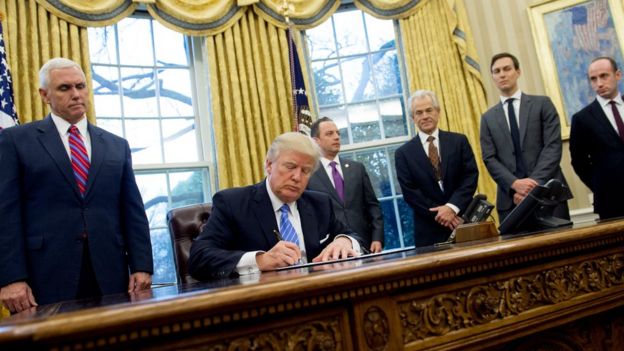 This historic image was taken on US President Donald Trump’s first day in the Oval Office. (It was the 23rd January 2017, for the record).

It shows him signing an abortion-related order. He’s surrounded by various top White House figures, including Vice-President Mike Pence on the left.

That the people in the background matter.

This fairly standard photo-op garnered a significant backlash. Column inches, Twitter threads and TV airtime were all dedicated to the reaction.

Why was the response so fierce? Because, as critics of the order were quick to point out, there are no women in the picture.

“All of these people seem eminently qualified to determine WOMEN’S health care. Not,” one Twitter user said at the time. “Notice anyone missing?” another asked.

But one person’s questionable photo-op can be another’s opportunity. So, right on cue, Sweden’s deputy prime minister responded with what many felt was a mocking parody.

Tags:
How to
Political photo-ops