The truck-pusher’s “truck” is evolving 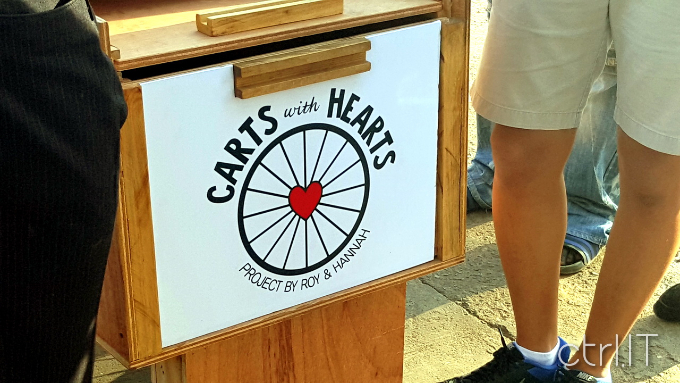 When you think of teenagers, helping out may not be the first thing on your mind but two Korean teenagers resident in Ghana are on a mission to make a difference in the community that will change that perception.

It’s a late Saturday afternoon inside the Coco Lounge at the Airport City in Accra. I’m sitting at a table with two teenagers, Roy and Hannah Park.

This duo of teenagers, Korean, are siblings. They attend the Lincoln Community High School in Dzorwulu, Accra.

These teenagers are talking to me about revolutionizing how Ghanaian hawkers who sell on “trucks” (the type that coconut sellers and scrap dealers use) and wheel-barrows trade can go about their trade.

First, they conducted a survey and noticed how these “trucks” were inefficient. They spoke to me about how the platform wasn’t surrounded with a border, and so the traders’ goods kept falling off; how the large wheels, reused from abandoned cars, made it difficult to pull or turn since they were heavy; how braking was difficult and sometimes impossible; how difficult it was when going uphill or downhill; and how the carrying capacity of these trucks were limited due to their flat surfaces.

On one of their reconnaissance trips, Roy, who wants to be an engineer in future, bumped into 17-year-old Frederick, a coconut trader who was using one of these inefficient trucks.

Frederick was passionate about his trade, even though his ultimate dream was also to be an engineer. As a result, Roy & Hannah chose Frederick to be the first beneficiary of their cart, “Carts with Hearts”.

“Carts with Hearts” because each of Roy and Hannah’s carts has a valuable life, which will further impact the user’s life as well. The duo also say the carts, though efficient for the traders, will also bring happiness to the society and enlighten people about the significance of sharing.

They worked tirelessly on the design till they came up with a final sketch, which they passed on to the manufacturers.

The final design was made of wood, a steel frame and lightweight tyres.

As the first beneficiary of the model 1 of Carts with Hearts, Frederick was excited. His “base”, the Star-Oil Fuel Station Adjacent the Vodafone Head-Office at Kwame Nkrumah  Interchange, was crowded.

There were the press, taxi-drivers, passers-by, the fuel station attendants, mobile phone hawkers and all other hawkers in general.

Everyone was curious to know what was happening. The question on most people’s lips, “what is that?”

Cart with Hearts’ first “child” was the centre of attention for all gathered there. It was different.

It has a deep wooden enclosure, where all the products or wares being sold will be kept; a storage pocket for tools, which in Frederick’s case would be his machete and plastic bags. The steel frame surrounds the wooden box and extends to the front, providing a carrying handle for the owner to push or pull.

The design, reminiscent of a traditional Asian Cart, is both practical and efficient. The light-weight materials made it easier for Frederick to climb and descend slopes, the storage capacity was high and allowed him to store twice as many coconuts without the risk of them toppling over, the tyres are light and made it easier to move around, the platform on top also doubled as a display for the products

After Roy and Hannah had walked Frederick through how to use his all-new cart, the new question everyone was asking was, “Is it for sale? Where can we get them to buy?”.

Fortunately for Frederick, he didn’t have to ask nor answer those questions since he was getting his for free.

After the cart exchanged hands, the team left Frederick with his new cart. What is the Way Forward for Carts with Hearts?

Moving forward, Roy and Hannah have met with the director of “Hipsters of Nature”, Beatrice, who proposed connecting the carts with nature by using environmentally-friendly materials, like bamboos instead of the steel pipes. They also plan to cooperate with Non-Governmental Organisations and KOICA to expand the project nationwide.