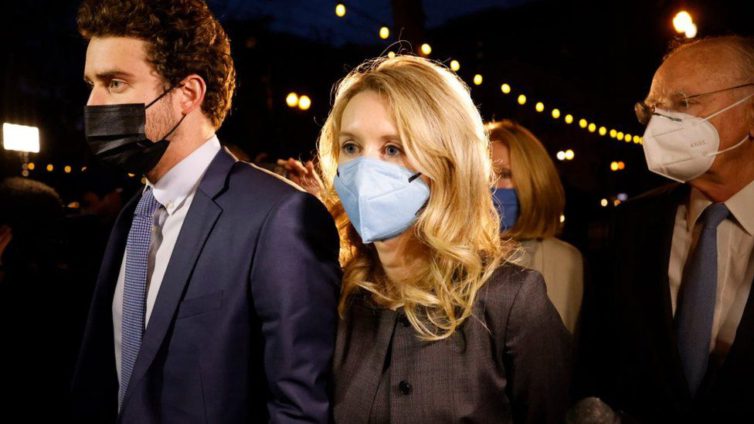 Theranos founder Elizabeth Holmes has been convicted of defrauding investors after a months-long landmark trial in California.

Prosecutors said Holmes knowingly lied about technology she said could detect diseases with a few drops of blood.

Jurors found Holmes guilty of four charges, including conspiracy to commit fraud against investors and three counts of wire fraud.

She denied the charges, which carry a maximum prison term of 20 years each.

Holmes was not taken into custody, with no date confirmed yet for sentencing and a further hearing scheduled next week.

She faced 11 charges in total and was found not guilty of four charges relating to defrauding the public.

The split verdict came after the judge said the jury, having deliberated for seven days, could deliver a partial verdict after being unable to reach consensus on another three counts.

Theranos, at one point valued at $9bn (£6.5bn), was once the darling of Silicon Valley.

The firm promised it would revolutionise the healthcare industry, but its claims began to unravel in 2015 after a Wall Street Journal investigation reported that its core blood-testing technology did not work.

For nearly four months at trial, the jury of eight men and four women were presented with two starkly different accounts of the former self-made billionaire, whose downfall shook Silicon Valley.

Calling some 30 witnesses, the prosecution sought to prove that Holmes knew the product she was selling to investors was a sham, but remained hell-bent on the firm’s success.

At trial, multiple lab directors testified that they told Holmes about the flaws in Theranos’ technology but were instructed to downplay their concerns. At the same time, they said, Holmes told investors the technology was operating as planned.

Holmes “chose fraud over business failure. She chose to be dishonest with investors and patients”, said prosecutor Jeff Schenk in closing arguments. “That choice was not only callous, it was criminal.”

The defence countered with descriptions of a dedicated and driven businesswoman, making waves in a male-dominated industry.

The rise and fall of Elizabeth Holmes

Testifying in her own defence, Holmes acknowledged mistakes in Theranos’ operation, but maintained she never knowingly defrauded patients or investors.

Elizabeth Holmes claimed her diagnostics machines could test hundreds of diseases. They couldn’t.

Considering she was the founder and CEO of Theranos you might think the case would be an easy win for the prosecution. But for a number of reasons the guilty verdicts were by no means assured.

These technical fraud cases are extremely difficult to prosecute. Jurors were asked to consider hundreds of documents and sit through evidence from dozens of witnesses.

Holmes has just had a baby and some commentators believed she would strike a sympathetic character.

The difficulty in successfully prosecuting Holmes is reflected in the verdicts – a real mixed bag of decisions from the jury.

But considering how difficult white-collar fraud cases are to prosecute, the government will be happy with what stuck.

Her former partner, Sunny Balwani, will now face trial next month in the same court for similar charges. It’s likely Holmes will not be sentenced until after that case has concluded.

The verdict sends a clear and frank message to Silicon Valley founders – there are consequences when you say things to investors that aren’t true.

US Attorney Stephanie Hinds thanked the jurors, who she said had navigated a “complex case” over 15 weeks to reach their verdict.

“The guilty verdicts, in this case, reflect Ms Holmes’ culpability in this large-scale investor fraud and she must now face sentencing for her crimes,” the prosecutor said in a statement read out by an assistant.

Holmes founded Theranos as a teenager, shortly after dropping out of chemical engineering at Stanford University.

She was able to raise more than $900m from billionaires such as media magnate Rupert Murdoch and tech mogul Larry Ellison.

The firm officially ceased operations in 2018 following the scandal.

DISCLAIMER: The Views, Comments, Opinions, Contributions and Statements made by Readers and Contributors on this platform do not necessarily represent the views or policy of Multimedia Group Limited.
Tags:
Elizabeth Holmes
Theranos Trial