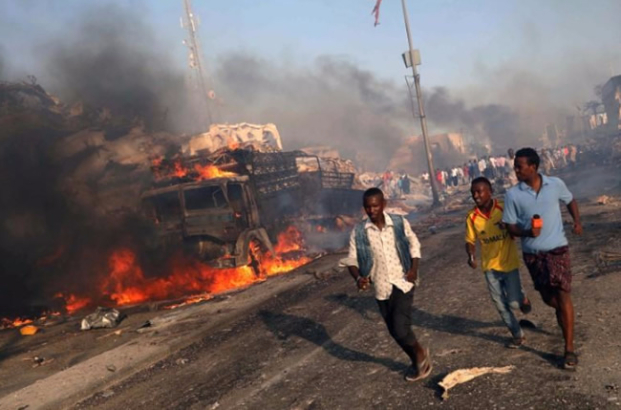 Thousands of Somalis prayed in Mogadishu on Friday at a symbolic funeral for more than 300 people killed by the country’s deadliest truck bombing.

The truck detonated next to a fuel tanker on Saturday, creating a huge fireball that incinerated multi-story buildings. Around half the dead were burned beyond recognition, said authorities.

The government conducted mass burials soon after the blast, in keeping with the Muslim practice of interring the dead as quickly as possible.

Religious leader Abdi Hayi said mourners had decided to conduct a symbolic funeral six days on, as it had not been possible to give so many of the victims a proper send-off with prayers at a mosque.

“Since we have not seen many bodies we came to conduct the funeral at the spot of the blast,” he said.

The bomb attack was the deadliest since Islamist militant group al Shabaab began an insurgency in 2007. Al Shabaab has not claimed responsibility, but the al Qaeda-linked organization has increasingly used truck bombs.

Somalia has been mired in conflict since 1991, when clan warlords overthrew a dictator then turned on each other. One of the poorest countries in Africa relies on foreign donors to support its institutions and basic services.

The battle-scarred coastal city is on edge after the bombing. A central road in the city emptied quickly after locals suspected a minivan loaded with vegetables was carrying a bomb. As police checked the van, shopkeepers and residents fled the scene.

“I closed my shop and ran away,” said shopkeeper Abdullahi Omar. “We have much fear and still the shock … persisting in our minds.”